Anti-government demonstrators threw paint and daubed graffiti on Thailand’s national police headquarters in Bangkok on Wednesday night, a day after dozens were hurt when police used tear gas and water cannon against them in some of the worst violence during months of of protests.

The student-led rallies are demanding changes to the military-scripted constitution and the resignation of Prime Minister Prayuth Chan-ocha, who first took power in a 2014 coup. They have also called for reforms to the monarchy, a once-taboo subject, in the most serious challenge to the Thai establishment in years.

Tens of thousands of people on Wednesday packed the Ratchaprasong intersection in the heart of Bangkok’s shopping and commercial district, before they marched on the heavily-defended national police headquarters – led by a clown and a parade of giant inflatable rubber ducks.

They were accompanied by a Buddhist monk giving the three-fingered salute borrowed from the “Hunger Games” movies that has become the symbol of the protest movement.

Wednesday’s protest came a day after the most violent confrontations since the democracy movement began in July, when police fired tear gas and irritant-laced water cannon on protesters trying to reach parliament, where legislators had begun debating possible changes to the constitution.

“We came here solely because of our anger,” said one of the rally leaders, Panusaya ‘Rung’ Sithijirawattanakul.

“Slaves of tyranny,” the protesters chanted outside the police HQ, as they placed dog food by the gate as an insult. The outside quickly became a multi-coloured mess of paint and anti-monarchy graffiti.

Many had come equipped with helmets, goggles and gas masks to protect themselves against any police action, and the yellow ducks were meant to be used as shields. Police barricaded themselves inside and made no immediate attempt to stop the demonstration.

‘We will not touch on that’

Police spokesman Kissana Phathanacharoen said the protesters had vandalised public property and charges would be brought.

Protests have been largely peaceful, but Bangkok’s Erawan Medical Centre said at least 55 people were hurt on Tuesday, with 32 suffering from tear gas inhalation and six from gunshot wounds. It was not clear who was responsible for the shooting.

There were also scuffles with royalists who turned out in a counter protest.

Al Jazeera’s Scott Heidler, reporting from Bangkok, said that in contrast protesys on Wednesday were largely peaceful and people in high spirits.

“Today there is much more of a celebratory mood,” he said.

In parliament, members voted on seven proposals for ways to change the constitution, but a proposal that would have opened the way for a discussion of the king’s role did not win approval.  Two proposals to discussion constitutional change without affecting the monarchy were adopted.

“We will not touch on that,” said Wirat Ratanaset from the ruling coalition of royal reform.

Prayuth’s supporters have a majority in parliament, and the entire upper house was chosen by the military government he led before the 2014 election.

Protesters next plan to rally outside the Crown Property Bureau on November 25 over the management of palace assets valued at billions of dollars.

King Maha Vajiralongkorn has taken personal control of the fortune. 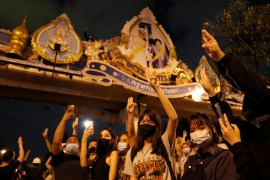 The move to ban gatherings and curb information only served to fuel anti-government protests. 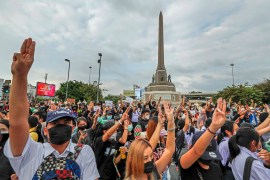 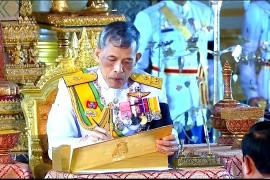 A few days ago, the king announced a surprise wedding with the deputy head of his personal security force.