Armenian Foreign Minister Zohrab Mnatsakanyan has quit his post, in the most significant departure of a government official following a deal last week that ended fierce fighting with Azeri forces over the disputed region of Nagorno-Karabakh.

The resignation, announced by the ministry’s spokeswoman in a Facebook post on Monday, comes as pressure is rising on Prime Minister Nikol Pashinyan to step down.

Thousands of demonstrators protested last week to demand he resign over a ceasefire that secured territorial gains for Azerbaijan after six weeks of battles that resulted in the deaths of more than 2,300 Armenian servicemen. Azerbaijan has not disclosed its military casualties.

Pashniyan has taken responsibility for the loss of territory, but said he signed the accord to prevent further losses and save lives in the wake of Azerbaijan’s substantial military advances. He has pledged to stay in office and bring stability to the country.

On Saturday, Armenia’s National Security Service said it had arrested a group of former officials who “were planning to illegally usurp power by murdering the prime minister”.

“The government has done very little to prepare the population for the scale and severity of losses. The tension is to linger, and unfortunately, the domestic situation is increasingly unstable,” he told Al Jazeera.

But Girgagosian said the fate of Pashniyan, who was elected in 2018 after mass demonstrations against alleged corruption removed the former elite, remained unclear.

“Pashinyan came to power in 2018 in a rare victory of non-violent people power. He is a survivor and even the plot to assassinate him comes from a marginal group tied to the former government,” he added. “His real political fate lies in his own hand.”

Meanwhile, Russian President Vladimir Putin held a phone call with his French counterpart, Emmanuel Macron, to discuss the events in Nagorno-Karabakh, according to the Kremlin.

The two leaders said the situation in the region had generally stabilised and it was time to address humanitarian issues, including the return of refugees and the preservation of Christian churches and monasteries.

Despite Armenia ceding swathes of territory and the deployment of a Russian peacekeeping mission, a long-term solution to the decades-long conflict remains elusive.

Since the mid-1990s, efforts by the co-chairs of the Minsk Group – Russia, France and the United States – have not produced lasting results.

Azerbaijani President Ilham Aliyev has adopted a hard stance in victory, backtracking on an earlier promise of autonomy for Nagorno-Karabakh.

“Karabakh will have no [autonomous] status as long as I am president,” Aliyev has said.

Baku can also count on the unwavering support of Turkey, which after having armed and supported Azerbaijan in the latest war, has established itself as a key player in the region.

Ankara will also play a part in the peacekeeping operations, even if its role remains vague.

Aliyev, who sees the Minsk Group members as pro-Armenian, has welcomed a new negotiating format that would include Turkey.

Historically, Yerevan sees Turkey as a foe determined to wipe Armenia off the map and will push to exclude it from any future negotiations on Nagorno-Karabakh. 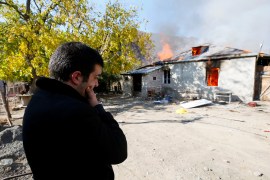 First handover of land held by ethnic Armenians to Azerbajian is due on Sunday under deal ending six weeks of fighting. 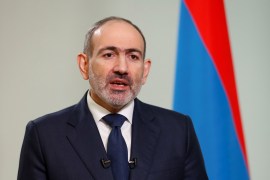 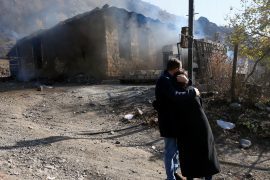 Residents of Armenian origin in Kalbajar district of Nagorno-Karabakh are on a mass exodus as Azerbaijan takes over.