20:43 GMT – NATO calls for ceasefire between Azerbaijan and Armenia

NATO Secretary-General Jens Stoltenberg called for an immediate ceasefire between Armenia and Azerbaijan, as fighting continues between the two countries over the Nagorno-Karabakh region.

Stoltenberg was speaking to the annual GLOBSEC forum in Slovakia.

19:55 GMT – Russia says defense pact does not apply to Karabakh

Responding to a question on the possibility of Russia sending troops to the Upper Karabakh region, Dmitry Peskov said: “If a CSTO member country is exposed to some aggression, attack from the outside, in this case, the member states of the treaty have commitments to stand up for such a state.”

Azerbaijani authorities have accused Armenia of launching missiles to target the Baku-Tbilisi-Ceyhan oil pipeline that carries Azerbaijani crude to Turkey and on to global markets.

They said the missile attack was repelled by the Azerbaijani military.

Shushan Stepanian, the spokeswoman for the Armenian Defence Ministry, denied that the Armenian forces were targeting oil and gas facilities.

The foreign ministry said a Thursday “working visit to Geneva” will see Foreign Minister Jeyhun Bayramov meet leaders of the OSCE’s Minsk group, which is jointly chaired by diplomats from France, Russia, and the United States.

The Turkish broadcasting watchdog RTUK ordered broadcaster Halk TV to pay a fine after it criticised Azerbaijan over deadly clashes in the disputed Nagorno-Karabakh region.

The penalty follows “derogatory, insulting and slanderous” remarks against the state of Azerbaijan and President Ilham Aliyev, a RTUK member, who asked to remain anonymous, told the DPA news agency.

France accused Turkey of “military involvement” on the side of Azerbaijan in its conflict with Armenia over the breakaway Nagorno-Karabakh region.

“The new aspect is that there is military involvement by Turkey which risks fuelling the internationalisation of the conflict,” French Foreign Minister Jean-Yves Le Drian told Parliament.

Armenia and Azerbaijan, two former Soviet republics, have for decades been locked in a conflict over Nagorno-Karabakh, an ethnically Armenian area which broke away from Azerbaijan in a 1990s war that cost about 30,000 lives.

Greece’s Foreign Ministry says it is recalling its ambassador to Azerbaijan following what it says are “completely unfounded and insulting allegations” by the Azerbaijani government that it is tolerating the preparation of terrorist acts.

In a statement, the ministry said the Greek ambassador had been recalled to Athens for consultations. It said the Azerbaijani government had claimed Greece was tolerating the preparation of terrorist acts, attempts to recruit terrorist fighters and cyberattacks against Azerbaijan due to the latter’s conflict with Armenia over the separatist region of Nagorno-Karabakh.

The ministry said it had filed a protest over the issue on Tuesday with the Azerbaijani ambassador in Greece.

.@GreeceMFA announcement on the unacceptable allegations made by the government of Azerbaijan

France’s foreign minister said talks would be held in Geneva on Thursday and Moscow on Monday to try to convince warring sides in the Nagorno-Karabakh conflict to agree to negotiate a ceasefire.

Jean-Yves Le Drian told Parliament’s foreign affairs committee that France, Russia and the United States would hold those talks to start a dialogue that needed to take place without preconditions.

Al Jazeera’s Bernard Smith reporting from Goris, Armenia, said foreign ministers of Armenia and Azerbaijan are likely to be present at these talks. “One foreign minister will go to Geneva, and one will go to Moscow. We don’t know which way it will be,” Smith added.

Good evening. This Usaid Siddiqui in Doha taking over from Farah Najjar and Anealla Safdar.

Armenia PM Nikol Pashinyan, in an interview with the BBC, has defended his country’s presence in Nagorno-Karabakh.

Using the Armenian name for the area – Artsakh – Nikol Pashinyan said it was “Armenia, land of Armenians”. He said the region was facing assault from the combined forces of Azerbaijan, Turkey and what he called “terrorists” from Syria.

Ankara and Baku have rejected accusations by several heads of state, including Syria’s Assad and France’s Macron, that Syrian fighters were operating in the region.

The Armenians of Nagorno-Karabakh are facing an existential threat. So, IF the Armed Forces of Azerbaijan succeed, it will mean a #genocide for the Armenians of #NagornoKarabakh.
My interview to @BBCWN https://t.co/fs0gAQ9Bzd

Azeri President Ilham Aliyev said that his country would return to talks with Armenia after the acute phase of military conflict in Nagorno-Karabakh region ends, Russian news agency TASS cited him as saying.

Aliyev, who spoke to Russian President Putin by phone, said in an interview with Russian state television that Turkey had the right to participate in mediation.

Speaking to reporters on a conference call, Peskov said Aliyev had called Putin to congratulate him on his 68th birthday and that the two men had used the opportunity to discuss the conflict.

Russian President Vladimir Putin called for fighting to stop in the Nagorno-Karabakh region, saying the deadliest fighting in more than 25 years between ethnic Armenian and Azeri forces was a tragedy.

Speaking in a interview with state television, Putin said he was in constant contact with Armenian Prime Minister Nikol Pashinyan about the conflict.

Putin described the fighting as a “tragedy” and said he hoped it would end “in the very near future”.

“Of course this is a huge tragedy. People are dying, there are heavy losses on both sides,” he said.

Putin says Russia doesn’t have an obligation to defend Armenia because the war with Azerbaijan isn’t happening in Armenian territories.

Karabakh is an Azerbaijani territory under international law, occupied by Yerevan for the last 30 years pic.twitter.com/Gm2VyVEnrB

Iranian President Hassan Rouhani warned of the danger of the Azerbaijan-Armenia conflict turning into a regional war.

“We must be attentive that the war between Armenia and Azerbaijan does not become a regional war. Peace is the basis of our work and we hope to restore stability to the region in a peaceful way,” Rouhani said in televised remarks.

He also said Iran would not allow “states to send terrorists to our borders under various pretexts”.

Half of Nagorno-Karabakh’s population have been displaced since fierce fighting erupted more than a week ago between Armenian troops and Azerbaijan, ethnic Armenian officials in the breakaway region said.

“According to our preliminary estimates, some 50 percent of Karabakh’s population and 90 percent of women and children – or some 70,000-75,000 people – have been displaced,” Karabakh’s rights ombudsman Artak Beglaryan told AFP news agency.

The defence ministry of the Nagorno-Karabakh region said it had recorded another 40 casualties among its Armenia-backed troops, pushing the military death toll to 280 since fighting with Azeri forces erupted, the Interfax news agency reported.

Good morning. Farah Najjar in Doha and Anealla Safdar in London will be bringing you the latest updates on the Nagorno-Karabakh crisis today, Wednesday, October 7.

Fighting in Nagorno Karabakh has continued for a second week as Armenia and Azerbaijan clash over the breakaway region.

Armenia’s Prime Minister Nikol Pashinyan said his country could make concessions over the region if Azerbaijan would do the same.

So far, the two rivals are ignoring international appeals for a ceasefire and have accused one another of causing civilian and military casualties since clashing on September 27. 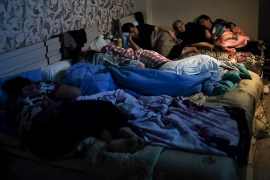 Clashes erupt periodically in the Nagorno-Karabakh region, and the latest crisis has raised fears of an all-out war. 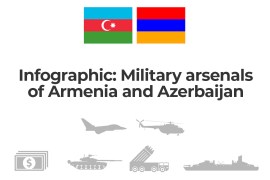 A side-by-side comparison of the defence budgets and military capabilities of Armenia and Azerbaijan. 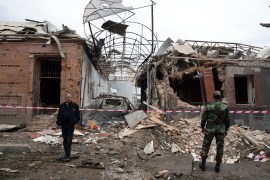