Ivory Coast’s President Alassane Ouattara is seeking to secure a controversial third term in a tense presidential election held amid opposition calls for a boycott and a civil disobedience campaign.

At least 30 people have been killed in pre-election violence, evoking memories of a 2010-2011 crisis that killed about 3,000 people.

Polling stations opened at 8am (08:00 GMT) on Saturday and are due to close at 6pm (18:00 GMT), though it is not clear when the results will be announced. Electoral authorities by law have up to five days to announce the results.

Ouattara was supposed to step aside after his second term to make way for a younger generation, but the sudden death of his chosen successor forced a change in plan.

The 78-year-old, a former IMF official who has been in power since 2010, says a Constitutional Court ruling approved his third term, allowing him to bypass two-term presidential limits after a 2016 legal reform.

But opposition leaders say a third mandate is unconstitutional. They accuse the electoral commission and the Constitutional Court of favouring the government, making a fair and transparent vote impossible.

“I appeal to those who launched this slogan for civil disobedience which has led to deaths: Stop. Ivory Coast needs peace,” Ouattara said after voting in Abidjan. “I urge young people not to let themselves be manipulated.”

Later, Affi N’Guessan said: “This electoral coup was a failure. The Ivorian people have managed to defeat this election.”

Meanwhile Guillaume Soro, an influential former rebel chief whose candidacy for the election was invalidated, said he no longer recognised Ouattara and urged people in the country to work towards his departure.

“I no longer recognise Ouattara as President of the Republic. People of Ivory Coast, we have no other option than to work to remove Ouattara,” Soro, who lives in exile, wrote on Twitter.

On Saturday, the streets of the largest city Abidjan were largely quiet, in contrast to the violent run-up to the polls. But efforts to obstruct voting led to clashes and the vandalisation of polling stations in other parts of the country, although the opposition and the authorities gave differing accounts of the impact of the disruption.

“Apart from a few isolated places – a dozen or so – the vote is going well,” Ouattara said. Out of more than 22,300 polling stations, 30-40 were vandalised, according to the electoral commission.

The opposition said whole swathes of the country had not participated in the vote or had been prevented from doing so. Affi N’Guessan said they estimated around 12 people had died as a result of the civil disobedience campaigns.

Protesters blocked the main route between Abidjan and the north of the country near the central town of Djebonoua, 350km (220 miles) north of Abidjan, local residents said.

Groups of youths also set up makeshift barricades in some neighbourhoods in and around Daoukro, a stronghold of Bedie, AFP news agency reported. In Benanou, a village near Daoukro, a large tree trunk blocked a key road.

The election is seen as a major test of stability in a country still recovering from months of post-election violence in 2010 and 2011 that killed some 3,000 people.

“Looking at the history of elections in Ivory Coast, many people in country believe the opposition will stand firm on their word that civil disobedience against Ouattara and the election will continue,” said Al Jazeera’s Ahmed Idris, reporting from the Nigerian capital, Abuja.

“This is what many fear and it could lead violence,” Idris said.

While the UN has called for calm, the opposition urged supporters to carry out an “active” boycott and a campaign to block the vote, stoking fears of violence in opposition strongholds.

“The question is what will the opposition do after November 1?” said Sylvain N’Guessan, director and political analyst at the Abidjan Strategies institute.

More than 35,000 police and security personnel have been mobilised to secure the election.

The run-up to the polls saw sporadic clashes in the south of the country, mainly between local ethnic groups close to the opposition and Diaolu communities from the north who are seen as loyal to the president.

The country’s political feuds are often closely tied up with its leader’s ethnic identities and regional loyalties.

On Friday, police fired tear gas in the political capital of Yamoussoukro to break up fighting between Diaolu youth and opposition-aligned Baoule communities, according to residents. 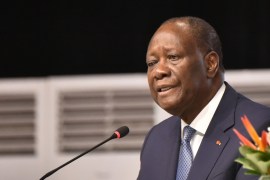 Ouattara announced in August he will seek another term following the sudden death of his handpicked successor. 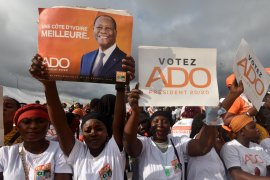 Ethnic clashes in Ivory Coast opposition stronghold ahead of poll 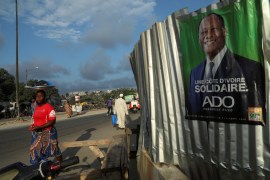