Protests against new restrictions designed to stem the coronavirus have broken out across Italy, with violence reported in Turin and Milan, in the country’s north.

On Monday night, some protesters in Turin broke away from a peaceful demonstration, smashing shop windows, ransacking luxury shops, and clashing with police, who fired tear gas in return.

Several hundred protesters assembled in Milan – the capital of the Lombardy region which was the epicentre of the global pandemic in March, at the regional government’s headquarters, with some throwing stones, petrol bombs and fireworks.

According to ANSA news agency, 28 people are being detained in Milan; three police officers were injured amid the clashes in the two cities.

At least 37,479 people have died with coronavirus in Italy since the start of the pandemic.

People took to the streets after Prime Minister Giuseppe Conte on Monday imposed a new round of rules aimed at stemming the spread of coronavirus. He announced the early closure of restaurants and pubs at 6pm (17:00 GMT) and shut down theatres, gyms and cinemas.

Most high schools were ordered to hold online classes and a number of regions imposed night curfews.

The tough, but still partial restrictions, came as the government strives to avoid a nationwide lockdown such as the measures enforced in March.

While Italians went through one of the world’s strictest lockdowns in the first wave with a sense of solidarity and compliance, the new measures have provoked an angry response.

Business owners, still recovering from the first closure, are exasperated amid fears that closing shops again would send them into bankruptcy.

Trying to defuse the anger, Conte met protesters in Rome on Monday night to assure them that funds were on the way for business owners.

The government has promised financial aid to workers and businesses affected by mandatory closures, and relief measures were expected to be approved in a cabinet meeting on Tuesday.

“The primary objective is to regain control of the epidemiological curve to avoid that its steady rise can compromise the efficacy of our health sector, as well as the resilience of the social and economic system as a whole,” Conte said in an open letter published on Tuesday, by the Corriere della Sera newspaper.

Italy is witnessing a resurgence of coronavirus infections, reporting on Sunday its highest number since the beginning of the pandemic with more than 21,200 cases – double compared with the previous week. As of Tuesday, 14,281 people had been hospitalised. 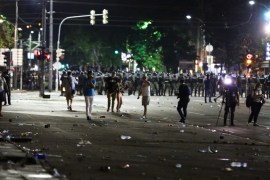 Protests erupted across the country after President Vucic announced the return of round-the-clock weekend curfew. 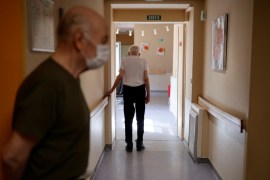 Authorities in US, Canada, Italy, France and Spain launch investigations into response of several nursing homes. 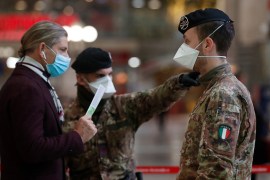 Italy coronavirus lockdown: What are the restrictions?

Italy becomes first country in Europe to put more than 60 million people on lockdown to stem spread of virus.