Eight civilians and two policemen were killed in Guinea’s capital Conakry in clashes between security forces and opposition supporters after a tense presidential election with results showing President Alpha Conde in the lead.

“This strategy of chaos [was] orchestrated to jeopardise the elections of October 18,” the ministry said in a statement, adding numerous people were wounded in the unrest, without providing a specific figure.

Opposition supporters burned barricades in the streets on Wednesday after initial results showed Conde ahead in vote-counting.

“At least three people died today [Wednesday] that I saw with my own eyes … and about 10 others were wounded,” Mamadou Keganan Doumbouya, a security official, told AFP news agency.

Hadjiratou Barry, a resident of an area where clashes were taking place, also said her brother had been shot dead. A local doctor, who declined to be named, said he received two dead bodies and nine injured people at his clinic.

“Clashes broke out on the Prince’s Road. A policeman was killed,” Security Minister Damantang Albert Camara told Reuters news agency, referring to a major thoroughfare in the capital that runs through opposition strongholds.

Diallo has claimed victory in the vote based on his campaign’s tallies.

The push for a third term for Conde, 82, has sparked repeated protests over the past year, resulting in dozens of deaths. He says a constitutional referendum in March reset his two-term limit; his opponents say he is breaking the law by holding onto power.

In a social media post, Conde on Wednesday appealed for “calm and serenity while awaiting the outcome of the electoral process”. 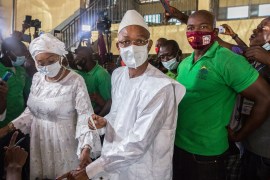 Announcement comes despite opposition leader claiming irregularities and declaring himself winner of first round. 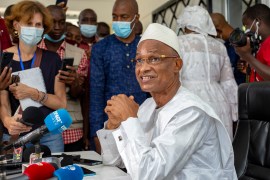 Guinea: Diallo says he won round one, election body says no 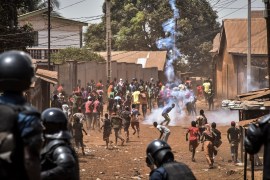