Donald Trump has held his first public event since being diagnosed with COVID-19, as the United States president seeks to show the public he is fit to resume campaigning ahead of the November 3 elections.

Trump was not wearing a mask as he addressed a crowd of a few hundred cheering supporters Saturday afternoon from a White House balcony, where he spoke about “law and order” issues in the country.

“I’m honoured to welcome you. We call this a peaceful protest in the White House in support of the incredible men and women of law enforcement and all of the people that work so well with us,” Trump said.

The speech came after White House physician Sean Conley said the president could once again hold public events as of Saturday, 10 days after he tested positive for COVID-19.

The US Centers for Disease Control and Prevention (CDC) says people infected with COVID-19 can see others 10 days after their symptoms first appeared, provided their symptoms are improving and they have not had a fever for at least 24 hours without the use of medication.

But public health experts have cautioned against holding large public events where congregants do not wear masks to prevent the potential spread of the novel coronavirus – and some observers questioned Trump’s decision to hold Saturday’s address.

“I was not surprised to see a super-spreader event given the circumstances. Crowded, congregate setting, not wearing masks. It is not surprising to see an outbreak,” Fauci told The Associated Press news agency.

Maeve Reston, a CNN political reporter, said White House safety protocols did not appear to have changed much since Trump tested positive for COVID-19. An unnamed source told CNN that Saturday’s event attendees would be subject to temperature checks.

“But when it comes to preventing the spread of the disease, the White House still seems to be flouting basic public health precautions, with their Saturday protocol not looking much different from the September 26 Rose Garden event,” Reston wrote.

But Trump on Saturday sought to portray the US as triumphing over the pandemic, saying that COVID-19, which has killed more than 210,000 US citizens to date, “is disappearing” and telling the crowd that he was “feeling great”.

“Through the power of the American spirit, I think more than anything else, science, medicine will eradicate the China virus once and for all. We’ll get rid of it all over the world,” said Trump, using a xenophobic phrase to refer to the novel coronavirus.

The crowd gathered on Saturday wore blue shirts in support of Blexit, a conservative group co-founded by right-wing commentator Candace Owens that says it aims to lift up minority communities.

“Every day more Black and Latino Americans are leaving behind left-wing politicians and their failed ideology,” Trump told the crowd.

“They failed for many years and many many decades. Democrats have run nearly every inner city in America. And I mean, for 100 years their policies have delivered nothing but calamity, poverty and trouble.”

While the majority of those in attendance wore masks, there was little in the way of physical distancing during the White House event.

Al Jazeera’s Kimberly Halkett, reporting from Washington, DC, said the attendees – some of whom wore masks, while others did not – were tightly packed into the crowd.

Meanwhile, Halkett said “there has been no transparency” from the White House about the president’s current health condition, despite Trump’s plan to get back on the campaign trail in the coming days.

“We’re really left to speculation and the words of the president who insists that he’s okay to hit the campaign trail and that he’s back,” she said.

While Saturday’s event was billed as an official White House event – and not a campaign event – the president has been eager to get back to campaigning.

He has been unable to travel since returning to the White House on October 5 from Walter Reed hospital where he was treated for the disease and had urged his campaign to quickly schedule a rally in a battleground state but logistical obstacles prevented it.

He announced on Friday he would hold a rally in Florida on Monday. His campaign then said Saturday that Trump would hold an event in Pennsylvania on Tuesday and another in Iowa on Wednesday.

Polling averages also show Biden with a substantial edge in some key battleground states, including Michigan, Wisconsin and Pennsylvania.

“What we are seeing is a president with less than 25 days left until the election … going full steam ahead to try to make his case,” Ham said.

Will be in Sanford, Florida on Monday for a very BIG RALLY! https://t.co/TTOlHJT8kr

Trump’s absence from the campaign trail has given a temporary advantage to Joe Biden who has continued to meet with voters in key states. It also threw the election campaign into disarray, forcing the cancellation of the second presidential debate, which was scheduled for October 15.

The former vice president campaigned in Pennsylvania on Saturday for a second time this week. He was also in Nevada and Arizona, two key southwestern states that both candidates are fighting for in the election.

Biden’s campaign also said he had tested negative for COVID-19 on Saturday before he left for Pennsylvania.

Asked about his opponent’s White House rally on Saturday, Biden said he hoped Trump and his supporters were taking safety precautions. “They should be socially distant and wearing masks,” Biden said, as reported by Reuters. “It’s the only responsible thing to do.” 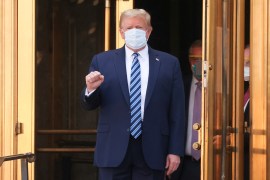 What we know, and do not know, about President Donald Trump’s bout with COVID-19 after he tested positive on October 1. 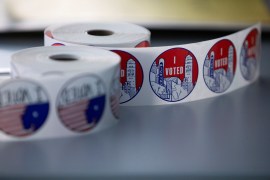 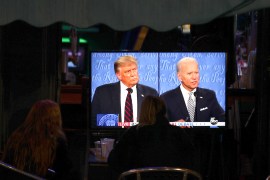