Police in Uganda have arrested presidential hopeful Bobi Wine and fired tear gas to disperse his supporters as he sought to kick off public meetings before an election next year.

Bobi Wine, a singer-turned-politician who is particularly popular among young Ugandans, was scheduled to begin on Monday a week-long series of consultations ahead of the 2021 presidential poll.

But the first event at a Catholic Church in his constituency in the capital, Kampala, could not proceed as police deployed before dawn to the site, prompting protests by his supporters, an AFP news agency reporter saw.

Police spokesman Fred Enanga confirmed that Bobi Wine and members of his entourage had been arrested.

“We are temporarily holding them in our police station in Kasangati. We shall have to release them at some later stage but we are looking at charges of holding an unlawful assembly and disobedience of lawful orders,” Enanga told AFP.

Uganda's pop star-turned-politician, Bobi Wine, jumped on a moving motorcycle to escape security forces after they surrounded him ahead of a concert. pic.twitter.com/EjWuWGK4ti

Bobi Wine, who seeks to unseat longtime President Yoweri Museveni, has already been detained a number of times.

He has had numerous attempts to hold concerts blocked since he was elected as a member of parliament in 2017.

Enanga said Bobi Wine, whose real name is Robert Kyagulanyi, planned to exceed what is allowed under Uganda’s election laws by “going early and conducting campaigns” as opposed to holding “consultations”.

Under Uganda’s 2000 election law, presidential “aspirants” may carry out “nationwide consultation” in the 12 months before their official nomination as candidates.

The law requires aspirants to “introduce” themselves to the Electoral Commission (EC) and notify local authorities of events planned in their area.

On December 3, Bobi Wine sent a letter to the EC, officially introducing himself and outlining his plans, which he published on social media.

In the past, the police have warned opposition politicians that all events must also comply with the Public Order Management Act 2013.

Human Rights Watch has criticised that law as granting the police “wide discretionary powers over the content and management of public meetings”.

Museveni, 75, seized power as the head of a rebel army in 1986 and many observers say they doubt he will ever give up power through democratic elections. 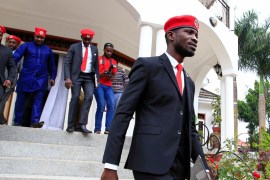 Bobi Wine said that his escape was meant to prove to the authorities that ‘we can do that’. 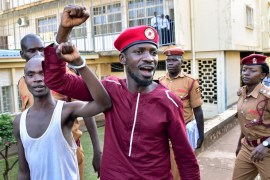 Pop star-turned-opposition figure calls ban a ‘sham’ and says his opposition movement is ‘more than a red beret’.

He was wearing a red tie and his signature red beret, which he has called a ‘symbol of resistance’.