Forces loyal to Libyan renegade military commander Khalifa Haftar have blocked oil exports from the war-ravaged country’s main ports on the eve of an international summit aimed at bringing peace to the North African country.

Powerful tribal groups loyal to Haftar, whose forces control eastern Libya and much of the south, seized several large export terminals on Friday along the eastern coast as well as southern oil fields in a challenge to the rival UN-recognised government based in Tripoli, which collects revenues from oil production.

The National Oil Company (NOC) said the closure of Libya’s “oil crescent” will cause the country’s daily crude production to plunge from 1.3 million barrels to 500,000 barrels and cause losses of $55m a day.

The critical oil industry is dominated by the NOC, which declared that the suspension of exports would prevent the company from fulfilling contracts with international oil companies.

The NOC condemned the unrest, describing oil as the “lifeblood of the Libyan economy” and the country’s only source of revenue.

“Oil facilities belong to the Libyan people and should not be used as a card for political bargaining,” the chairman of the corporation, Mustafa Sanalla, said.

Haftar and head of the Government of National Accord (GNA) Fayez al-Sarraj are expected to join the leaders of Russia, Turkey and France at a summit in Berlin on Sunday aimed at bringing peace to Libya.

In a news conference, a spokesperson for the forces described efforts to cripple oil production as a “major step for the Libyan people”.

“The Libyan people are the ones who shut down oil ports and fields and are preventing oil exports,” said spokesman Ahmed al-Mosmari, adding that it sent a “message of rejection” to militia groups defending Tripoli against a months-long siege by Haftar’s forces.

Its statement urged Libyans to “exercise maximum restraint” as international negotiations seek a resolution to the crisis.

They demanded that Arab countries take a “strong and clear position” in support of Haftar’s eastern government and against “terrorist” militias.

Turkey’s escalating involvement in the oil-rich country, including through maritime and military agreements with the Tripoli government, has rattled eastern Mediterranean countries that see Turkey as a threat to their gas and drilling rights in the region.

The warring parties and their various international backers will convene on Sunday in Berlin. The summit aims to find a political solution to the conflict and halt intensifying foreign interference in the country. 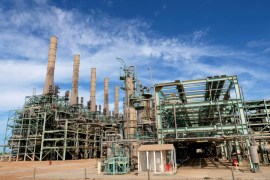 The call comes after Libya’s national oil company warned against attempts to blockade ports ahead of the Berlin summit. 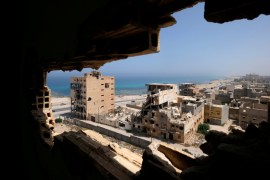 All eyes on Berlin as Libya rivals, world powers set for talks

Representatives from Libya’s warring sides, as well as from several nations, due to meet in latest bid to end fighting. 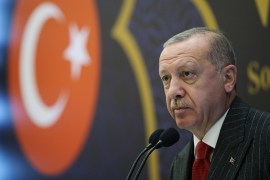 Turkish president urges Europe to support Ankara’s moves in Libya, days after he ordered deployment of troops there.