In Lebanon‘s Bekaa Valley, another cold winter has set in and that means trouble for the Syrians seeking refuge there.

Syrian refugee families living in informal tent settlements in Bar Elias are struggling to keep warm. Most tents have stoves used for both heating and cooking, but refugees cannot afford to buy wood or diesel fuel.

Instead, they burn toxic rubbish.

“There are people desperate for help. We have thousands of Syrian and Lebanese families living on less than $6 per month,” said Sarah Farou, a UNHCR civilian coordinator in eastern Lebanon.

Every winter the United Nations offers cash assistance to the most vulnerable refugees and Lebanese families. Each receives a one-off cash amount of about $370.

But a shortage of funding means fewer families are receiving support every year.

“There is never 100 percent sufficiency, there is always something missing for most people,” said Saleh Mustafa, a Syrian living in one of the camps in Bar Elias. “Some people can’t buy [wood], they go and get plastic to burn in their homes.”

In a nearby diaper factory, refugee workers take home faulty nappies as compensation for their working hours. They burn the nappies to heat their homes.

“The damaged ones, women take them and they benefit from them. They take them to their homes, they can [burn] them to make bread, they can put them in with the wood,” said a Lebanese woman who manages the factory’s 30 employees.

It is cheaper than wood and keeps her children warm, she said.

More than three-quarters of Syrian refugees in Lebanon live under the poverty line. Nine out of 10 families are indebted.

And as Lebanon grapples with its worst economic crisis in decades, refugees living in the tiny Mediterranean country are more vulnerable than ever this year.

In Jordan, Syrian refugees collected winter aid items to keep them warm during the cold season. It included heaters and blankets to help them overcome the harsh cold.

Volunteers from the Jordanian Red Crescent Society handed out winter supplies including heaters and blankets to help families face the frigid weather.

After receiving her aid, Syrian refugee Onoud al-Jassim sat in her near-empty tent in a camp for refugees in Shahab city.

The Jordanian Red Crescent’s aid distribution effort is part of the Warm Winter Campaign funded by the Qatari Red Crescent and Qatari Airways.

The campaign targets Syrians living in countries neighbouring Syria and operates in Jordan, Lebanon, Turkey and Iraq, according to the head of the Qatar Red Crescent delegation, Nehal Henfy.

Families also collected aid at the headquarters of the Jordanian Red Crescent in Amman on Saturday.

Some 230 Syrian refugee families and vulnerable Jordanians received aid in the Jordanian capital.

Among them was Mohammed al-Jasser, who fled the Hama countryside in Syria in 2012.

“We need foodstuffs, we need heating items and we need medical care. We suffer from harsh winters. We don’t have anything, we are powerless,” al-Jasser said.

Winter temperatures in the Jordanian desert can plummet to below zero degrees Celsius at night in January and February.

Jordan has provided refuge to an estimated 1.3 million Syrians, including some 670,000 people officially registered with the UN as refugees. 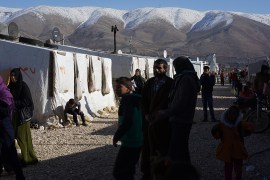 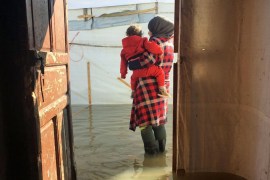 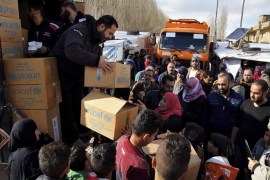 According to the UN, 40,000 children’s lives are at risk, as Lebanon faces harsh winter storms.