Beirut, Lebanon – Hezbollah denied its fighters staged an “infiltration attempt” that led to clashes with Israeli forces on Monday calling the Israeli account a move to create “false victories”.

The Lebanese armed group also vowed revenge for a Hezbollah member killed in a suspected Israeli air strike in Syria last week saying a response against Israel was “coming for sure”.

Israeli Prime Minister Benjamin Netanyahu disputed the armed group’s denial of any border incident, adding  “Hezbollah should know that it is playing with fire.”

The Israeli military said earlier three to five Hezbollah fighters crossed into the disputed Shebaa Farms area that is occupied by Israeli forces, and they were repulsed after Israeli troops opened fire. Shebaa Farms was captured by Israel in the 1967 Middle East war and is claimed by Lebanon.

But Hezbollah denied it carried out a raid over the southern border saying the incident was “from one side only, from the anxious enemy” who opened fire first.

“All the enemy media claims about thwarting an infiltration operation from Lebanese territory into occupied Palestine … is absolutely not true,” a Hezbollah statement said.

The armed group attributed the incident to “the state of terror experienced by the Zionist occupation army and its settlers at the Lebanese border” over an expected response to the killing of the Hezbollah fighter.

A resident of the town of Khiam, 5km (2 miles) from Lebanon’s southern border, told Al Jazeera she heard about two dozen explosions and witnessed large columns of smoke rising near Mount Hermon on Monday.

An Israeli shell smashed in a civilian home, narrowly missing a family in the house at the time, but nobody was hurt.

“The shelling that took place today on the village of Al-Habbariyeh and damage to a civilian’s house will not be tolerated at all,” Hezbollah said.

The Lebanese group added retaliation for the killing of the Hezbollah fighter in Syria last Monday was “coming for sure”.

“Our response to the martyrdom of the mujahid brother Ali Kamel Mohsen – who was martyred in the Zionist aggression on the outskirts of Damascus International Airport – is definitely coming and the Zionists only have to wait for the punishment for their crimes,” the statement said.

Hezbollah parliamentarian Walid Sukkarieh said Monday’s incident was a “setback for the Israeli army and … Israeli society’s confidence in their army.”

The Israeli army’s Arabic-language spokesperson, Avichay Adraee, said troops foiled a Hezbollah attack a few metres over the Blue Line, which demarcates Israel’s 2000 withdrawal from Lebanon. There were no casualties among Israeli forces.

Andrea Tenenti, the spokesperson for UN peacekeeping force in southern Lebanon (UNIFIL), said its commander, Major-General Stefano Del Col, “is in contact with both parties to assess the situation and decrease tension”.

Karim Makdissi, an associate professor of international relations at the American University of Beirut, told Al Jazeera that Hezbollah was setting the stage for a more significant response to the slaying of one of its fighters in Syria, though he ruled out a large-scale conflict.

“They’ve denied that they did anything this time round and therefore they reserve the right – and even have an obligation – to respond in the future,” Makdissi said. “They’ve gotten good at this brand of psychological warfare – saying to the Israelis that they should wait, with the knowledge that a response will eventually come. It’s sort of like a show: ‘come back tomorrow and see what happens’.”

Israel and Hezbollah fought to a stalemate in a month-long war in Lebanon in 2006. Hezbollah was able to overwhelm Israel’s ground invasion of southern Lebanon and attack military and civilian targets, undermining support for the war inside Israel.

“I don’t see either side having a particular interest in another war,” said Makdissi. “There can be token events but that’s about it. Hezbollah will feel the need to respond to maintain this deterrence mechanism it has built up over years.”

Tension has risen along Israel’s northern frontier with Lebanon and Syria, including the occupied Golan Heights, after the Hezbollah fighter was killed in an apparent Israeli air attack near Damascus last Monday.

“What happened in Syria is an aggression that led to the death of Ali Kamil Mohsen,” Hezbollah’s second-in-command Naim Qasim said in a televised interview on Sunday.

Wiam Wahab, a former Lebanese minister and a well-connected pro-Hezbollah politician, said Monday’s incident “was not an operation” by Hezbollah but may have been a reconnaissance mission.

Speaking in parliament earlier, Netanyahu said the government was closely following developments in the north.

Smoke rising over south #Lebanon border area after a reported "security incident" that follows a week of high tensions between Israel & #Hezbollah. https://t.co/7I8x8ct43v

“The military is prepared for every scenario,” he said. “We operate in all the arenas for Israel’s defence – close to our borders and far from our borders.

“Lebanon and Hezbollah will bear the responsibility for any attack from Lebanese territory.”

Following the killing of two Hezbollah members in Syria last August, Hassan Nasrallah, the group’s leader, pledged that it would respond if Israel killed any more of its fighters in the country.

Hezbollah deployed fighters in Syria as part of Iranian-backed efforts to support President Bashar al-Assad in the country’s nine-year conflict.

Israel sees the presence of Hezbollah and its ally Iran in Syria as a strategic threat, and has mounted hundreds of air raids on Iranian-linked targets there.

The last exchange of fire between Hezbollah and Israel took place in September 2019, when the Lebanese armed group launched rockets across the southern border at an Israeli vehicle, and Israel responded by shelling border areas. There were no confirmed casualties.

That attack came in response to an Israeli drone attack on Beirut’s southern suburbs, a Hezbollah stronghold. 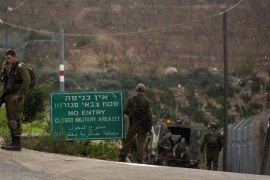 The move comes after a Hezbollah fighter was killed in an air raid in Syria’s capital, Damascus, earlier this week. 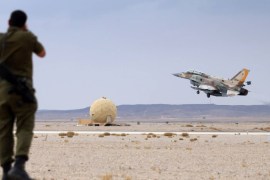 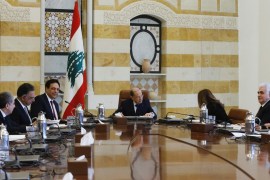