China has ordered the United States to close its consulate in the southwestern city of Chengdu, retaliating against Washington’s move earlier this week to shut down the Chinese consulate in the city of Houston.

The Chinese foreign ministry said on Friday the Chengdu mission’s closure was a “legitimate and necessary response to the unreasonable measures by the United States”.

“The current situation in China-US relations is not what China desires to see,” it said in a statement, adding that “the US is responsible for all this”.

“We once again urge the United States to immediately retract its wrong decision and create necessary conditions for bringing the bilateral relationship back on track.”

It did not say when the consulate must be vacated, but Hu Xijin, the editor-in-chief of the Communist Party-owned Global Times newspaper, said the notice period was 72 hours. “It means US Chengdu consulate will be closed Monday morning,” he wrote on Twitter.

The tit-for-tat moves come amid a dramatic escalation in tensions between the world’s two biggest economies. On Tuesday, Washington gave Beijing 72 hours to close its mission in Houston, Texas, alleging the theft of intellectual property and espionage – a claim the Chinese side called “malicious slander”.

Ties have also deteriorated over a number of issues, ranging from the new coronavirus pandemic to Beijing’s trade and business practices, and its territorial claims in the South China Sea to its clampdown in Hong Kong and the far western region of Xinjiang.

Al Jazeera’s Katrina Yu, reporting from the city of Wuhan in China’s Hubei province, described the latest escalation as “a blow” to bilateral relations.

“There are about 200 staff working at the Chengdu consulate, including about 50 US officials,” she said. “The consulate is also considered quite an important listening post for the US, when it comes to issues such as Tibet and Xinjiang.”

Meanwhile, in a significant speech on Thursday, US Secretary of State Mike Pompeo took fresh aim at Beijing, saying Washington and its allies must use “more creative and assertive ways” to press the Chinese Communist Party (CCP) to change its ways.

Speaking at the Nixon Library in President Richard Nixon’s birthplace in Yorba Linda, California, Pompeo said the former US leader’s worry about what he had done by opening the world to the CCP in the 1970s had been prophetic.

“President Nixon once said he feared he had created a ‘Frankenstein’ by opening the world to the CCP,” Pompeo said. “And here we are.”

“The truth is that our policies – and those of other free nations – resurrected China’s failing economy, only to see Beijing bite the international hands that were feeding it,” he continued.

“The freedom-loving nations of the world must induce China to change … in more creative and assertive ways, because Beijing’s actions threaten our people and our prosperity.”

Pompeo said “securing our freedoms from the Chinese Communist Party is the mission of our time” and said the US was perfectly positioned to lead it.

The speech drew sharp criticism from Beijing, with Hua Chunying, spokeswoman for the Chinese foreign ministry, saying Pompeo’s remarks suggested he wants to “launch a new crusade against China in a globalized world”.

“What he is doing is as futile as an ant trying to shake a tree,” she wrote on Twitter. “It’s about time that all peace-loving people in the world stepped forward to prevent him from doing the world more harm.”

It's about time that all peace-loving people around the world stepped forward to prevent him from doing the world more harm.

Also on Thursday, the US Justice Department said it believes the Chinese consulate in San Francisco is harbouring a Chinese researcher, Tang Juan, who is accused of lying about her background in the CCP’s military wing on a visa application.

The department announced criminal charges of visa fraud against Tang and three other Chinese researchers. The Justice Department said Tang lied on a visa application last October as she made plans to work at the University of California, Davis, and again during an FBI interview months later. 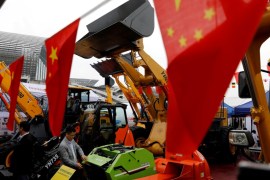 US president seeks to fault China as his polls show a growing number of voters think he has handled pandemic badly. 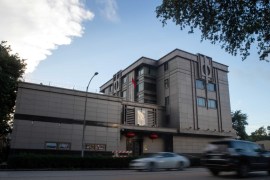 China says ‘must’ retaliate after US closure of Houston consulate

The US on Tuesday gave China 72 hours to close its consulate in Houston amid allegations of widespread spying. 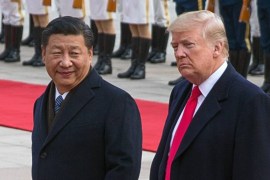 Have US-China relations soured to the point of no return?

China promises retaliation for closure of its consulate in Texas, after US gave diplomats there 72 hours to leave.