At least 24 people have been killed due to floods and landslides in Brazil’s southeastern state of Sao Paulo.

Hundreds of volunteers have joined rescue workers in a desperate search through the rubble to try to find 25 people who are still missing in the cities of Guaruja, Santos and Sao Vicente.

Rescue efforts have been hampered by disruptions to road services with trees and landslides blocking several major roads, including some into Santo, the largest port in South America.

An active cold front in the South Atlantic generated a trough of low pressure which provided the energy and moisture required to produce almost a month’s worth of rain on Sunday and Monday.

Flooding from the same weather system has also affected Rio de Janeiro where more than 5,000 people have been displaced.

Controversially, Rio’s mayor, Marcelo Crivella, blamed residents for the problem, telling journalists that “people can’t be throwing trash onto hillsides, in storm drains and in the street”.

Although showers are possible across the region in the next few days, it is expected to be much drier, which will help the rescue and recovery efforts. 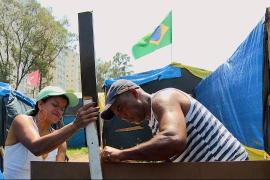 In Brazil, the shortage of affordable housing has forced many residents to set up temporary tents outside the country’s largest city, Sao Paulo. 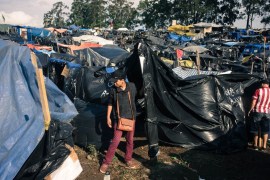 With the lack of affordable housing, thousands of families in Brazil have had to turn to tent cities to live.