Hong Kong is bracing for more demonstrations over the weekend, with protesters threatening to disrupt transport links to the airport as they continue their campaign for more democracy in the Chinese-ruled city.

On Wednesday, embattled leader Carrie Lam withdrew the controversial extradition bill that first triggered the mass rallies three months ago, conceding to one of the protesters’ five demands.

But the demonstrators, who are also calling for the right for Hong Kong to elect its own leader and an independent investigation into alleged police brutality, said it was not enough.

Germany’s Chancellor Angela Merkel, on a visit to China, raised the impasse with Chinese premier Li Keqiang in Beijing on Friday, saying a peaceful solution is needed.

“I stressed that the rights and freedoms for (Hong Kong) citizens have to be granted,” Merkel said in Beijing.

“In the current situation violence must be prevented. Only dialogue helps. There are signs that Hong Kong’s chief executive will invite such a dialogue. I hope that materialises and that demonstrators have the chance to participate within the frame of citizens’ rights.”

Li told a news conference with Merkel: “The Chinese government unswervingly safeguards ‘one country, two systems’ and ‘Hong Kong people govern Hong Kong people,” referring to the governing framework and freedoms agreed with the British when the territory reverted to China in 1997 and that residents fear is being eroded.

He said Beijing supported the administration in Hong Kong “to end the violence and chaos in accordance with the law, to return to order, which is to safeguard Hong Kong’s long-term prosperity and stability”.

On Friday, students stood hand-to-hand outside their schools to form human chains and press their case for the four remaining demands.

Rallies are planned on Friday evening which will home in on metro stations and government buildings.

On Saturday, protesters plan to block traffic to the city’s international airport, one of the region’s busiest hubs.

In an advertisement on Friday in the South China Morning Post newspaper, the Airport Authority of the Asian financial hub urged protesters “not to disrupt the journey of tens of thousands of travellers who use the airport every day”.

Many protesters remain angry over Lam’s refusal to initiate an independent inquiry into perceived police brutality in their handling of the protests.

Police have fired tear gas and bean-bag rounds at protesters, who, in turn, have thrown petrol bombs and bricks in running battles on city streets.

The protests present Chinese President Xi Jinping with his greatest political challenge since he came to power in 2012.

Legislation addressing China’s actions in Hong Kong will be among the top priorities pushed by Democrats in the United States Senate when Congress returns to work after a recess next week, their leader said on Thursday. 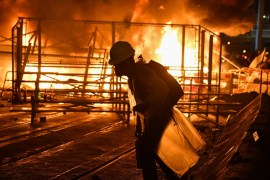 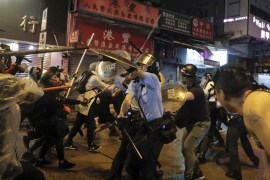