Philippine President Rodrigo Duterte said on Wednesday that while he was not a fan of online gambling he was not willing to ban the business, as China has urged, because of the risk to the country’s economy.

Duterte, who backed the Philippine gaming regulator’s move in late 2016 to license internet gambling, said he would not have allowed this “stupid activity” if there were plenty of jobs available.

“We decide to benefit the interest of my country. I decide that we need it,” Duterte said in a televised news conference but gave a stern warning to online gambling operators to pay fees and taxes.

But most employees in the online gambling companies, known as Philippine offshore gambling operators (POGOs), are Chinese citizens, according to the Philippine-based website, Rappler.

In June 2018, Philippine Justice Secretary Menardo Guevarra was quoted as saying that 95,000 foreigners were issued work permits for Chinese-speaking gambling operations. That number has gone up to an estimated 138,000 foreign workers as of April 2019, according to the finance department.

POGOs are a boon for the local economy, drawing many visitors from China, raising demand for property and retail spending.

The POGOs, which bar Filipinos from playing, contribute to national coffers through licence fees.

Still, it has been reported that the Philippine government may be losing as much as $617m a year in taxes, because of the misreporting of income taxes of foreign workers, according to the finance department.

But on August 19, Manila banned licences for new online gaming firms, as lawmakers and some ministers have called for tighter controls on Chinese visitors, saying many are illegal workers whose presence fans security concerns.

China said after that move that it hoped the Philippines would go further and ban online gaming to support its crackdown on cross-border gambling.

Except for state-run lotteries, gambling is banned in China, forcing many of Chinese gambling companies to move overseas.

Aside from online gambling, the Philippines has also attracted tens of thousands of Chinese gamblers who play at its casinos in the capital Manila and elsewhere.

The Philippine central bank and the anti-money laundering body has been studying the scope of the online gambling industry to determine the effect on the economy if it stopped operating.

Cambodia last month heeded China’s plea to ban online gambling, an industry that brought in Chinese investment but had been used by foreign criminals to extort money. 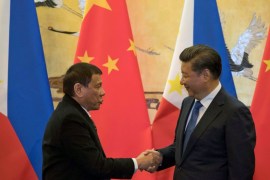 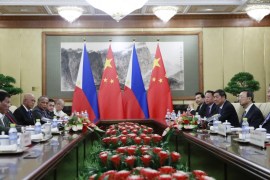 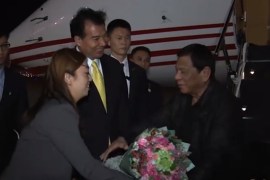 Philippine president expected to raise Hague ruling on South China Sea in his meeting with President Xi on Thursday.