But 186km upstream in Barwani town on the banks of the Narmada River in neighbouring Madhya Pradesh state, the mood was anything but celebratory.

Nearly 2,000 men, women and children, riding bikes and packed in tractors and trucks, rallied in Barwani, a town of about 55,000 people, against submersion of their homes, property and businesses due to the dam.

The country’s biggest dam has led to mass submergence after the authorities recently raised the water level to its maximum height of 138.68 metres.

We voted for Modi but he stabbed us in the back

Narmada Bachao Andolan (NBA), a grassroots movement agitating for the rights of the indigenous people displaced by the dam, said at least 178 villages in Madhya Pradesh have partially or fully submerged after the dam’s water level was raised.

However, the state government has yet to put out a specific number of villages submerged so far, which it says is fewer than the number cited by the NBA.

Protesters gathered at Kasrawad bridge on Narmada River alleged the dam’s water level was raised before the schedule to mark the birthday of Prime Minister Modi, who had pushed for it when he was the chief minister of the Gujarat state.

Slogans such as “Modiji ek kaam karo, Sardar Sarovar mei doob maro” (Mr Modi, do one thing, drown in the Sardar Sarovar) were raised as people dumped Modi’s effigy into the Narmada waters.

“We voted for Modi but he stabbed us in the back,” Patidar, a veteran activist and one of the founding members of the NBA, told Al Jazeera.

The submergence has already killed three people. On August 22, Laxman Gopal, a 62-year-old farmer from Jangharva village in Barwani, died of a heart attack after a tiff with policemen who were evicting his niece from the submergence site. On August 7, two men were electrocuted while travelling in a boat.

Since its foundation stone was laid by India’s first Prime Minister Jawaharlal Nehru in 1961, the Sardar Sarovar Dam has been mired in controversy over the delay in compensation to thousands of people displaced by the project.

The 1,300km-long Narmada River, which originates in Madhya Pradesh state and passes through Maharashtra and Gujarat, is considered a lifeline for Gujarat state.

The dam is expected to provide irrigation and power to Gujarat but it has displaced thousands of people in Madhya Pradesh.

The Supreme Court has ruled that compensation package – that includes land, housing plot with amenities, and financial assistance – had to be provided at least six months before submergence.

But activists say about 28,000 project affected families (PAFs) have yet to receive the promised compensation. The government and the activists, however, have differed on the total number of PAFs. NBA puts it at 48,000, while the government figure stands at 32,000.

Medha Patkar, the leader of the NBA, accused the government of violating the Supreme Court order on raising the water level.

“They claim it is to test the dam safety mechanism, but couldn’t they have waited till the last person was rehabilitated?” she asked.

But Narmada Control Authority (NCA) – a joint government agency of the three states and the federal government – says all 32,542 PAFs have been rehabilitated.

SR Yadav, the NCA director of resettlement and rehabilitation, claimed the authority had compensated 1,624 families in line with a Supreme Court order of February 8, 2017. The remaining PAFs, he said, had been compensated in 2017 itself.

“Some of the PAFs had filed bogus papers to claim additional compensation,” he told Al Jazeera.

However, a letter from the chief secretary of Madhya Pradesh, sent on May 27, 2019, to the NCA chairman, tells a different story.

The letter – a copy which Al Jazeera has seen – asked “the NCA to review the proposal of raising the water level as more PAFs eligible for a compensation of Rs 60 lakh (approximately $85,000) were still under various stages of adjudication.”

In spite of knowing this, Patkar claimed, the NCA went ahead with raising the water level.

People on the ground said they did not get adequate warnings to prepare for the deluge.

Water entered the ancestral house of Vinod Yadav, a doctor from Chota Barda village in Barwani district, a week back. “We had been warned by the local authorities, but nobody knew when the water would come,” Yadav said.

Even though his family had applied for rehabilitation in 2017, they have received neither land nor financial compensation, he claimed.

“This flooding is unprecedented. I have to take a boat to reach my clinic in Anjar,” Yadav told Al Jazeera. He grieved the loss of a house that had been the family’s homestead for generations.

Dinesh Bhago from Bajri Kheda in Dhar district lost his home and four bighas of land – approximately 0.64 hectares (1.6 acres) – on which he had sown cotton. He claims he too has not received any compensation despite having applied for it multiple times.

Bhago, 27, along with his wife and three children, has been living in one of several tin-shed transit camps built by the Narmada Valley Development Authority, set up by the state government in Barwani town.

“My children can’t go to school as it is flooded. The tin shed leaks during the rain,” he said.

But it is not just the loss of home and land, the locals also fear a loss of culture and identity.

Savitri Kevat from the fishing community in Rajghat village lost her house and belongings. She is worried about the kind of life she and her family would lead in the transit camps.

“Here we feel like prisoners. The food makes me sick,” she stated. The government ration in the camp is proving to be hard to stomach for the residents. “They serve burned roti (chapati or bread) and watery dal with insects that even our dogs won’t eat,” Kevat said.

She rues that her husband cannot fish in the reservoir. “We use small boats that are meant for shallow water. The reservoir is too deep for fishing,” she said. “You steal our only source of income, and then you dump us here. For whose sins?” she asked.

Her transit neighbour, Seonta Sisodia, claimed that even those who got compensation had to sell off their livestock in the absence of grazing pastures.

“They don’t care for us. They just want to get rid of us,” she told Al Jazeera. 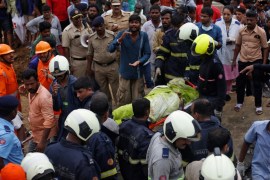 Heaviest monsoon rains in a decade have breached a dam in the western Indian state of Maharashtra.