Government employees on Monday resumed their duties at the Civil Secretariat, the headquarters of the Indian administration, following directions issued last week.

The directions also included the reopening of nearly 200 primary schools in selected areas of the disputed region.

Most schools, however, were empty as wary parents refused to send their children to school while the situation remains tense amid low-intensity and sporadic protests.

In a news conference in Srinagar, Syed Sehrish Asgar from the region’s information department said “30 to 50 percent” of staff was present in the schools on Monday.

“The attendance in schools was thin. We will throw open all the middle schools in the Valley from Wednesday,” she said, adding that the departments dealing in essential services were also operational.

Several parents Al Jazeera spoke to said the government was trying to “manufacture normalcy” by risking the lives of younger children amid the worst crisis Kashmir Valley had witnessed in decades.

“The students in primary classes age less than 12. There is still 99 percent communications blockade in the region. What if there are clashes on the way? Who will inform us and who will take responsibility of their safety?” asked Safiya Tajamul, a mother of two children in Natipora locality.

Since August 4, an unprecedented communications blockade has been imposed in the region, cutting the region from the rest of the world and preventing contact within Kashmir and with the outside world.

While some landline phones have been restored, residents said it was not enough.

The authorities have not commented on the restoring of internet and mobile phone services, which are the more common modes of communication in the region.

Nasir Mir, an engineer in Srinagar, told Al Jazeera that the situation was not ready for schools to open.

“The government wants children in uniforms to be videographed for the media and sell it as normalcy in Kashmir,” he said.

Srinagar’s state-run Kendriya Vidyalaya school reopened on Monday, but the staff there said only 100 out of more than 1,000 students turned up.

“Most of the students who arrived today are the children of defence personnel,” a school official told Al Jazeera.

In several neighbourhoods of Srinagar where restrictions were eased, groups of protesters were seen blocking the streets to stop traffic.

They were swiftly chased and dispersed by the police and paramilitary forces.

“The situation is slowly returning to normal,” he said.

The Kashmir Valley has remained restive over the past two weeks since Indian Prime Minister Narendra Modi‘s government announced the abrogation of Article 370, a law that granted the region its special status for seven decades.

“The youth in our locality have realised it is their last chance to do anything. They have decided to continue the protests. There is a lot of suppression. Large number of people are being arrested,” said Mohammad Shafi, a resident of Srinagar’s older parts where protests have been held every evening for two weeks.

Most of the region’s political leaders are among more than 1,000 people under arrest, according to official figures, which include three former chief ministers of the state, legislators, political workers and separatists.

Thousands of police and paramilitary troopers have been deployed in the region, one of the most militarised in the world with nearly 700,000 soldiers on the ground.

Markets and shops remain closed in Srinagar. Transport services, including trains and a fleet of privately-owned buses, have not yet returned to the roads.

“We are not going to open our shops. We feel it is a dangerous time irrespective of what social class one belongs to,” said a Srinagar resident who owns a shop in a local mall. “We will wait for some time.” 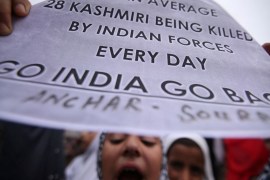