The interior minister of Yemen‘s internationally recognised government has said the United Arab Emirates won in the southern port city of Aden, a day after UAE-backed southern separatists took control of all government military camps and the presidential palace.

In a Twitter post published on his official account on Sunday, Ahmed al-Mayssari said: “We acknowledge defeat and congratulate the UAE on its victory … but this will not be our last battle.”

He also blamed the Yemeni government of President Abd-Rabbu Mansour Hadi and ally Saudi Arabia for remaining “silent” about the developments that had unravelled in Aden over the past few days.

On Saturday, the Security Belt – a militia aligned with the UAE-backed Southern Transitional Council (STC) which seeks the secession of the south – took effective control of various parts of Aden.

STC leader Aidarous al-Zubaidi on Sunday said in a televised appearance the council was committed to a ceasefire called by Saudi Arabia, and said the separatists were willing to attend a meeting called by Riyadh a day earlier.

He added they were also willing to work with the Saudi-UAE-led military coalition battling Yemen’s Houthi rebels.

Aden has been the temporary seat of Hadi’s government since the Houthi rebel movement seized the capital, Sanaa, in late 2014, prompting a military intervention the following year by the Saudi-UAE-led coalition in support of the president’s forces and aimed at stopping the rebels’ southern advance.

But this week’s deadly clashes between the UAE-backed separatists and the government troops highlighted a rift fracturing the alliance, threatening to open a new front in Yemen’s five-year-war that has killed tens of thousands of people and pushed the impoverished country to the brink of famine.

The infighting began on Wednesday when forces loyal to the STC attempted to break into the presidential palace in Aden after a call from former Cabinet Minister Hani Bin Braik, who serves as the council’s deputy head, to “topple” Hadi’s government.

The violence has so far killed up to 40 people and injured 260 others, the United Nations said on Sunday.

The last few days of clashes had taken place in predominantly civilian neighbourhoods, leaving many trapped without access to hospitals, clinics, or markets.

According to al-Mayssari, about 400 armoured vehicles provided by the UAE launched attacks against his forces in Aden.

In his series of tweets, al-Mayssari said he viewed the Yemeni presidential office’s silence regarding the latest events with “suspicion” and described the lack of reaction as inadequate.

“We condemn and we are surprised by its [Saudi Arabia’s] silence for four days, while our partner in the coalition is slaughtering us,” he said in a video posted online. “We will meet you soon on the ground.”

Officials with his government accused the STC of staging a coup, and said they held the council and the UAE “fully responsible”.

The two discussed “the latest developments in the region, particularly in Yemen”, the statement said, without adding more details.

It was only shortly after separatists announced their forces had seized the palace on Saturday night that the Saudi-led coalition called for an immediate ceasefire.

“[The coalition] asserts that it will use military force against anyone who violates it [ceasefire],” SPA quoted a spokesman as saying.

The coalition had also called on all military groups to immediately return to their positions and retreat from areas that have been seized over the past few days.

Writing on Twitter to mark Eid al-Adha on Sunday, Brik, the STC vice president, said while the council remained committed to the coalition it would “not negotiate under duress”.

It had earlier agreed to the truce.

Al Jazeera’s Mohammed al-Attab, reporting from Sanaa, said people in the south were expecting Saudi Arabia to declare another “decisive military campaign against the separatists … similar to the one launched against the Houthis in the north”.

Despite its jets monitoring the area for advancements, al-Attab noted the separatists have already taken control of all the military camps.

“Observers say Saudi is turning a blind eye to what’s happening,” he added.

“The STC seems to have the upper hand on the ground, especially with the UAE loading hundreds of armoured vehicles and weaponry.”

The UAE, which announced recently the beginning of troops’ withdrawal from Yemen, has armed and trained an estimated 90,000 allied fighters in the south.

In a statement on Friday, International Crisis Group warned that the clashes in Aden “threaten to tip southern Yemen into a civil war within a civil war”.

Such a conflict would deepen what is already the world’s worst humanitarian crisis and make a national political settlement harder to achieve. “In the past, half-measures helped de-escalate simmering tensions in the south; today’s circumstances require robust diplomatic intervention from the UN, Saudi Arabia and the United Arab Emirates to avoid the worst and help forge a durable solution.”

Meanwhile, at least nine people have been killed, including five children, in a Saudi-led air attack that hit a house in the country’s northwest, the Houthi-run Al-Masirah TV reported.

At least 11 other people were injured in the attack in al-Hajjah province.

The victims were reportedly members of one family displaced by the ongoing war. 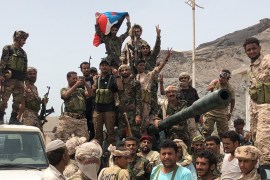 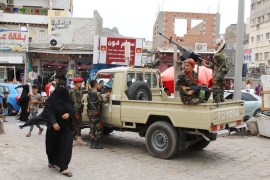 Could the Saudi-led coalition in Yemen soon fall apart?

Forces loyal to Saudi Arabia and those backed by the UAE have been fighting in Aden. 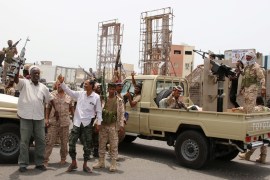