An attack this weekend by suspected Boko Haram fighters on a funeral in the northeastern state of Borno, Nigeria, has left at least 65 people dead, almost three times the initial toll, a local official said.

Dozens more bodies were discovered on Sunday following the assault a day before by gunmen on a village close to the regional capital, Maiduguri.

“It is 65 people dead and 10 injured,” said Muhammed Bulama, chairman of the local government.

Bulama said he thought the attack was in retaliation for the killing two weeks ago of 11 Boko Haram fighters by residents when the fighters approached their village.

“The villagers resisted the [earlier] attack, killed 11 insurgents and recovered 10 AK-47 rifles in the encounter,” he added.

“On Saturday at about 11:40am, the insurgents came on a reprisal mission, attacking mourners at a graveyard in the area.”

The leader of a local anti-Boko Haram militia confirmed the death toll, giving a slightly different account of the attack.

Bunu Bukar Mustapha told AFP news agency that 23 people were killed as they returned from the funeral and “the remaining 42 were killed when they pursued the terrorists”.

Al Jazeera’s Ahmed Idris said that while there has been no claim of responsibility, the attack bore the hallmark of Boko Haram.

“Everybody is in their crosshairs,” he said.

The group has waged a decade-long armed struggle in northeast Nigeria that has killed around 27,000 people and displaced more than two million others.

In 2016, the group split into two main factions, one following longtime leader Abubakar Shekau and another following Abu Musab al-Barnawi.

Shekau’s group tends to hit softer targets including civilians, while al-Barnawi’s Islamic State West Africa Province (ISWAP) has ratcheted up its campaign against the military since last year.

“The one led by [Abubakar] Shekau does not discriminate between security forces and civilians. So if we stick to that modus operandi, which is well known, we would believe that it is the Shekau faction that launched this attack,” Sadeeq Garba Shehu, a security analyst, told Al Jazeera from Nigeria’s capital, Abuja.

He added that the suspected reprisal attack by the fighters was meant to “show other communities who might think of resorting to self defence to defend themselves”.

Nigerian President Muhammadu Buhari on Sunday condemned the attack and directed the country’s air force and army to begin air patrols and ground operations to hunt down the attackers, a statement released by the president’s office said.

Commenting on the difficulties faced by Nigeria’s military to defeat Boko Haram, Shehu said “the honest truth is lack of capacity.”

“I’m not saying a lack of fighting capacity, but lack of capacity In terms of personnel, equipment, in terms of mobility access to react quickly,” he added.

“The Nigerian army, air force and the navy are all evolved in this operation; they are thinly spread on the ground. We do not have enough boots on the ground to pull that area.” 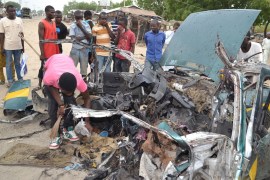 More than 100 women are working with security agents in Borno state to thwart Boko Haram attacks. 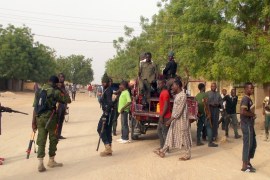 Why are IDPs being urged to return to unsafe areas in Nigeria’s northeast? 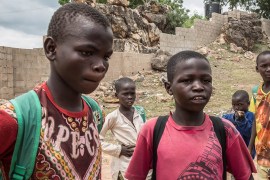 As children affected by violence dream of being soldiers to exact retribution, experts call for mental health support.