New Delhi, India – Protests were held in various parts of India on Wednesday following the lynching of a Muslim man, with people demanding an end to what they termed as “lynch terror”.

Tabrez Ansari, 24, was beaten to death by a Hindu mob in Kharsawan district in the eastern Indian state of Jharkhand on suspicion of theft, causing a public uproar.

Protests were planned in about 50 cities under the hashtag #JusticeForTabrez and #IndiaAgainstLynchTerror. It was not clear how many cities participated in it.

In the Indian capital, New Delhi, scores of people, including university students and activists, held a protest at Jantar Mantar close to the parliament house.

Holding placards and chanting slogans against the ruling Bharatiya Janata Party (BJP) and Prime Minister Narendra Modi, the protesters demanded an end to the violence against Muslims.

“Violence against Muslims has to stop,” said one of the speakers at the protest site. “Government must understand that we will not tolerate this lynch terror any more,” he added.

Mobile phone videos, which went viral on social media, shows Ansari tied to a lamppost and beaten by a mob before police intervened and took him into the custody. 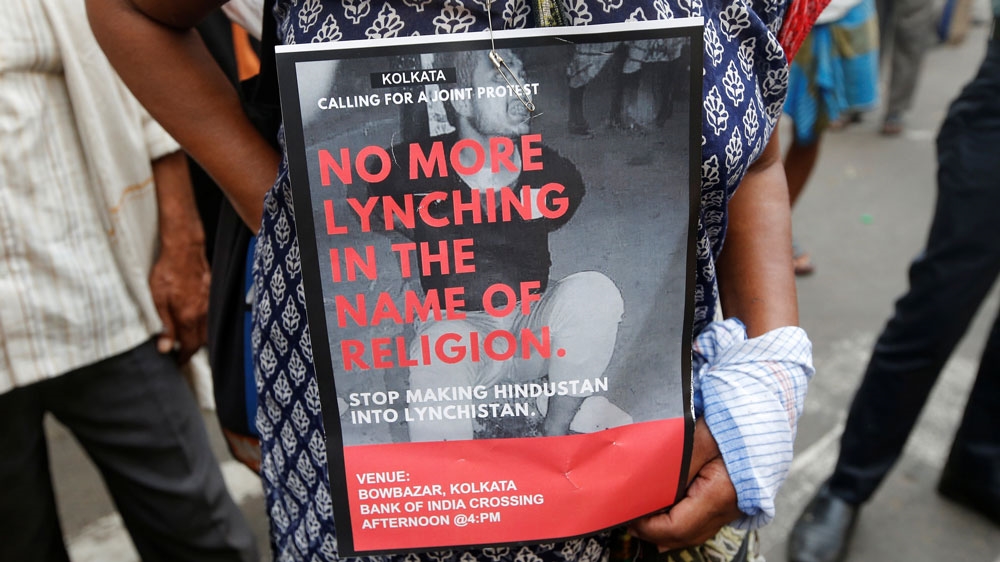 He was forced to shout “Jai Shri Ram” (Hail Lord Ram), a slogan increasingly used by Hindu far-right groups. In the footage, Ansari is seen crying and pleading for mercy while being beaten with sticks and forced to repeat the chants.

Police took Ansari to hospital for treatment but four days after the June 18 incident. He was pronounced dead shortly after arrival at a local hospital.

Police have arrested at least 11 villagers over the grisly attack and two officers have been suspended from duty.

“It is a very scary situation for Muslims,” Sana Maryam, a protester, told Al Jazeera. She alleged that the perpetrators of the violence have enjoyed impunity.

Another protester named Fatima, a university student, said: “We the people of India have been living in peace and harmony since very long and we have not been hostile to each other but after the BJP government came to power things have changed.”

“Efforts are being made to divide people in the name of religion so that they fight each other and the real issues are not talked about.”

The public anger prompted Prime Minister Modi to make a comment in parliament, saying he was “pained” by the incident and called for “the strictest possible punishment to the accused”.

However, he said that it was unfair on part of people to call the state of Jharkhand, also ruled by the BJP, “a hub of lynching”.

“The lynching in Jharkhand has pained me. It has saddened others too. But some people in the Rajya Sabha (Upper House of the Indian parliament) are calling Jharkhand a hub of lynching. Is this fair? Why are they insulting a state? None of us has the right to insult the state of Jharkhand,” Modi said. 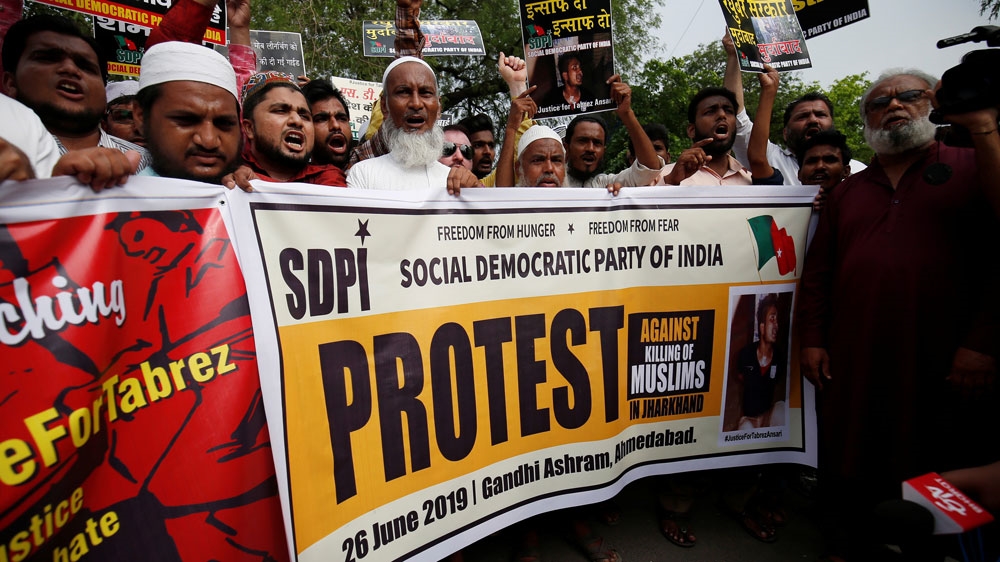 Kavita Krishnan, the secretary of NGO All India Progressive Women’s Association, said: “People from the Muslim community are being continuously targeted.”

“In almost every case of lynching, barring one or two, people have been arrested but never prosecuted or convicted,” she said.

Hate crimes against minorities, particularly Muslims, have increased in the South Asian nation since Modi’s Hindu nationalist party came to power about five years ago.

Dozens of Muslims have been attacked or lynched by Hindu mobs since 2014, in many cases over suspicion of cow slaughter which is banned in most Indian states, as Hindus consider the cow a sacred animal.

According to data from the website Factchecker.in, which has been monitoring hate crimes in India, this is the 11th instance of hate crime this year.

Last year, the Supreme Court condemned “horrendous acts” of mob violence and asked the government to enact a new law to deal with an increase in incidents of lynching.

In all the cases of hate crimes since 2009, the data indicates that in 59 percent cases the victims were Muslims and 28 percent of the incidents were related to alleged cattle theft or slaughter.

The report said: “There were reports of religiously motivated killings, assaults, riots, discrimination, vandalism, and actions restricting the right of individuals to practice their religious beliefs.”

New Delhi rejected the report, saying a foreign government had no right to pronounce on the state of Indian citizens’ constitutionally protected rights.

Ansari’s wife Shaishta Ansari told NDTV news channel that her husband was beaten so brutally because he was a Muslim. “My husband was my only support. Who will I live for now? I want justice.”

Activists say that “it’s an emergency situation” and the Indian government must act.

“India must realise that this is not an emergency for the Indian Muslims only but for India’s democracy as well,” said Apoorvanand, an activist and professor of Hindi at Delhi University.