The European Union has rejected Iran’s 60-day “ultimatum”, referring to Tehran’s decision to quit parts of the 2015 nuclear agreement a year after the US withdrew from the landmark accord signed with major world powers.

In a joint statement with the foreign ministries of France, the United Kingdom, and Germany, the EU urged Iran to respect the nuclear deal, and said it regretted new US sanctions imposed on Tehran.

The nuclear deal, formally known as the Joint Comprehensive Plan of Action (JCPOA), was designed to curb Iran’s nuclear programme in exchange for sanctions relief.

"We note with great concern the statement made by Iran concerning its commitments under the #JCPoA (Joint Comprehensive Plan of Action)." Read the full joint statement by @FedericaMog and the Foreign Ministers of France, Germany and the United Kingdom here https://t.co/h876mR3ZlR

“We strongly urge Iran to continue to implement its commitments under the JCPOA in full as it has done until now and to refrain from any escalatory steps,” the statement said.

“We reject any ultimatums and we will assess Iran’s compliance on the basis of Iran’s performance regarding its nuclear-related commitments under the JCPOA.”

On Wednesday, Tehran announced it would resume high-level enrichment of uranium if world powers do not keep their promises under the deal.

Iranian President Hassan Rouhani said the remaining signatories – the UK, France, Germany, China and Russia – had 60 days to implement their promises to protect Iran’s oil and banking sectors from US sanctions.

Francois Nicoullaud, a former French ambassador to Iran, said it was regrettable that EU leaders failed to protest the United States’ hard line on Iran with the latest sanctions.

“The last American decision really attacks the heart of the nuclear deal,” Nicoullaud told Al Jazeera. “The United States had the right under international law to leave the deal. But from outside, attacking the Iranian commitment – this is really a hostile attitude.”

In its statement, the EU said it remained committed to its stance regarding sanction-lifting for the benefit of the “Iranian people”.

The Europeans have set up a complicated barter-type system to skirt direct financial transactions with Iran to evade US sanctions. The workaround, dubbed INSTEX, is not yet operational as Iran has not completed its part of the scheme.

The bloc said it plans to push ahead with “the operationalisation of the special purpose vehicle ‘INSTEX”.

The EU has also introduced a so-called “blocking statute” protecting European companies from the effects of US sanctions, but many international corporations do more business in the United States than in Iran.

In a message implicitly directed at the US administration, the EU powers said, “We call on countries not party to the [deal] to refrain from taking any actions that impede the remaining parties’ ability to fully perform their commitments.”

Shortly after the EU statement, the spokesman of the Atomic Energy Organisation of Iran, Behrouz Kamalvandi, said: “Our goal is to strengthen the JCPOA and bring it back on track.”

Al Jazeera’s Zein Basravi, reporting from Tehran, said Iranian leaders believed it was time for their European partners to decide whether they wanted to implement their commitments to the deal “in the face of American pressure”.

“We are really getting a signal that in the last few weeks and months there have been lines drawn in the sand by the US and by Iran,” Basravi said.

He noted since Washington’s unilateral pullout, Iran has drifted away from depending on European partners “for anything but moral support”, as they have not yet had a functional effect on bettering Iran’s economy.

The EU’s statement may also be an attempt by European powers to draw their own boundaries, according to Al Jazeera’s Natacha Butler, reporting from Paris.

On Wednesday, European governments, including France, expressed concern over the developments threatening the agreement.

Meanwhile, Russia and China blamed US sanctions for Tehran’s announcement.

Iran’s Foreign Minister Javad Zarif insisted that Iran’s decision to withdraw from certain provisions did not violate the agreement, and said it had been provoked by the US.

He also said Iran would uphold its obligations if European signatories to the deal upheld theirs.

“In a way, they [European powers] have become increasingly trapped in the middle as the situation escalates between the US and Iran,” Butler said.

“EU leaders know that it is unlikely to come up with anything [solution] by that timeframe, and what they’re rejecting is that timeframe in the first place,” she said, referring to Iran’s 60-day window. 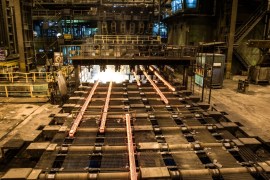 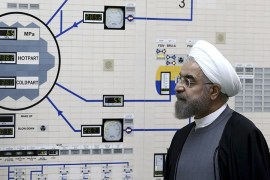 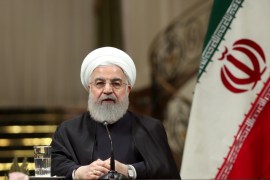