Johannesburg, South Africa – In the chronically under-served township of Alexandra, 64-year-old Elizabeth Sebile sits on the couch in a three-bedroom, state-subsidised house that she shares with her seven grandchildren, the walls around her cracked and blackened by damp.

Sebile is disabled and unable to work. She was, therefore, eligible to cast a so-called special vote on Monday, two days before the majority of South Africans go to the polls in the country’s general election, against a backdrop of economic woes and widespread anger at a perceived lack of progress after 25 years of democracy.

When asked who she voted for, she pointed to a framed picture of Nelson Mandela on the wall beside her. She has backed Mandela’s party, the ruling African National Congress (ANC), in every election since it came to power in South Africa‘s first democratic elections in 1994.

Sebile said that although “not much has changed” since then, she remained loyal to the ANC as they provide the paltry social grant on which she subsists. “Better the devil you know than the devil you don’t,” she added.

But other Alexandra residents interviewed by Al Jazeera said they had turned their backs on the ruling party due to its failure to adequately provide basic services such as water and sanitation, consistent electricity and government housing.

Amid a spiralling housing crisis in Gauteng province that has often manifested in Alexandra in the form of illegal land invasions, as well as forced evictions by both the state and local vigilante groups, many younger locals said they had turned to the far-left Economic Freedom Fighters (EFF) party.

According to pre-election polls, the EFF is set to make considerable gains on Wednesday, jumping from six percent of the vote in 2014, its first election, to between 10 – 14 percent this time.

The party, led by Julius Malema, has actively encouraged occupations of vacant private and state-owned land. It has also drawn more broadly on the symbolic appeal of land expropriation without compensation in a country whose majority-black population has experienced scant redress – whether economic, spatial or emotional – for centuries of discrimination, dispossession and forced removals by successive colonial regimes.

But a number of surveys have shown that while land reform has been a major campaign issue across the political spectrum in the run-up to elections, most voters are far more concerned about the stuttering economy and unemployment, as well as spiralling violent crime and the scourge of corruption.

The continent’s most industrialised economy has suffered a sustained period of sluggish growth and its economy has failed to expand by more than two percent a year since 2013. Gross domestic product (GDP) is falling on a per-capita basis as the population grows faster than the economy.

Official unemployment is 27 percent and according to the Institute of Race Relations, a think-tank in Johannesburg, the country’s economy needs to grow at five to six percent annually for 20 years to reduce unemployment to about 10 percent.

Under the ruinous nine-year tenure of former President Jacob Zuma, corruption and maladministration became endemic within the ANC, ravaging state-owned enterprises and leading to a dramatic increase in politically-motivated assassinations, particularly in the province of KwaZulu-Natal.

The inability of both the ANC and the centrist Democratic Alliance (DA), which currently governs the important cities of Cape Town, Johannesburg and Pretoria, to curtail this rise is illustrated through frequent and often deadly acts of vigilantism by members of under-policed communities against alleged criminals.

“A lot of the major political parties are not adequately addressing these key issues,” says political analyst Asanda Ngoasheng.

The ANC is almost certain to retain its parliamentary majority after Wednesday’s vote, according to opinion polls, but President Cyril Ramaphosa‘s efforts to tackle the various crises consuming South Africa since he took over from Jacob Zuma, who resigned after pressure from within his party in February last year, continue to be hampered by deep-set factionalism within the ANC.

The size of the expected victory will likely play a significant role in determining the extent to which he’ll be able to ramp up his reformist policies and root out corrupt members of his own party.

The DA has also been affected by infighting, which culminated in the controversial axing of its Cape Town mayor, Patricia de Lille, in May 2018. Polls predict that the DA will get between 20 – 24 percent of the vote, approximately the same as in its previous showing.

Both the ANC and the DA have been accused of stoking xenophobia through what many pundits have called “Trump-like” anti-immigrant rhetoric. In Alexandra, residents have repeatedly aired grievances that foreign nationals are taking scarce jobs and houses in an increasingly overcrowded area where unemployment is estimated to exceed 50 percent.

But a local resident who had helped to register voters in the area and asked to remain anonymous, said that this hadn’t swayed many younger residents, who felt disillusioned with politics in general. By his estimation, as many as 80 percent of under 25s in his area did not register to vote.

Across South Africa, about six million young people are not registered, a large swath of the population of so-called “born frees”, who were born after the first democratic elections in 1994.

For S’bu Lesego, another Alexandra resident who said that his vote was “a secret”, all three of the major political parties were too caught up in “pointing fingers” at each other rather than addressing basic needs of poor people in a country that the World Bank has labelled the most unequal in the world.

“They must produce results, they must show us that they are worthy of our votes,” he added. “All this talking, it’s just becoming annoying. Then after the elections you don’t see or hear anything from them for another five years.” 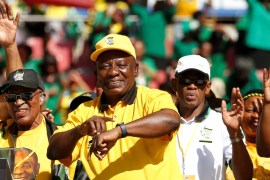 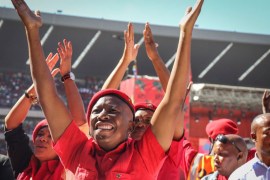 Forty-eight parties will appear on South Africa’s national ballot on Wednesday, 19 more than those registered in 2014.