Correction28 May 2019
A previous version of this article featured an old map that showed Montenegro as part of Serbia. The map has been replaced.

Kosovo Prime Minister Ramush Haradinaj confirmed the police action, saying on Twitter an “anti-smuggling and organised crime operation” was under way in northern Kosovo, which declared independence from Belgrade in 2008 after a bloody 1998-99 war that ended only after NATO intervention.

Serbian state TV reported shots were heard and tear gas was fired as Kosovo’s special police “burst” into several northern villages and the town Mitrovica with armoured vehicles early in the morning.

The region bordering Serbia is 90 percent populated by Serbs, who refuse to be part of Kosovo.

Serbian President Aleksandar Vucic said Kosovo police arrested 23 people, including Serbs, Bosnians and a Russian. He said he had seen video of the police firing “live ammunition” over the heads of unarmed Serbs, and said the operation was designed to intimidate minority Serbs in Kosovo, whose population is mostly ethnic Albanians.

Vucic said he ordered soldiers near the border to be on “combat alert” to protect Serbs if tensions escalate.

“I guarantee you if an escalation of the conflict occurs, if an attack against the Serbian people occurs, Serbia will win,” he added.

But one of his opponents, right-wing politician Miroslav Aleksic, accused Vucic and his Kosovo counterparts of stirring up tensions as “theatre” aimed at shoring up public support for a plan to eventually recognise the former province’s independence.

Kosovo President Hashim Thaci called on the ethnic Serb minority to remain calm and support the police, saying the fight against organised crime would speed up the country’s process towards integration with the West.

“Those involved in illegal activities will go behind bars,” he wrote on his Facebook page, adding the police operation was not targeting ethnic minorities.

Serbian government official Marko Djuric said the Kosovo police action is designed to intimidate and expel Serbs from Kosovo and presents “not only a threat to stability but the most direct threat to peace”.

“If this doesn’t stop immediately, there is no doubt how Serbia will react,” Djuric warned.

On Tuesday KFOR, the NATO-led troops tasked with protecting Kosovo for the past two decades, called for “calm” and said it was monitoring the situation.

Russia, a Serbian ally, called Kosovo’s actions a “provocation” and demanded the immediate release of the Russian, a UN employee. Thaci said earlier the Russian “was camouflaged under a diplomatic veil to hamper the police operation”.

Kosovo’s 1998-1999 independence war claimed more than 13,000 lives, mostly ethnic Albanians, and led to a humanitarian and refuge crisis with almost one million people fleeing for neighbouring Albania and Macedonia.

Serbia lost control over Kosovo after a NATO intervention in 1999 that stopped a bloody Serb crackdown against Kosovo Albanian separatists and civilians. 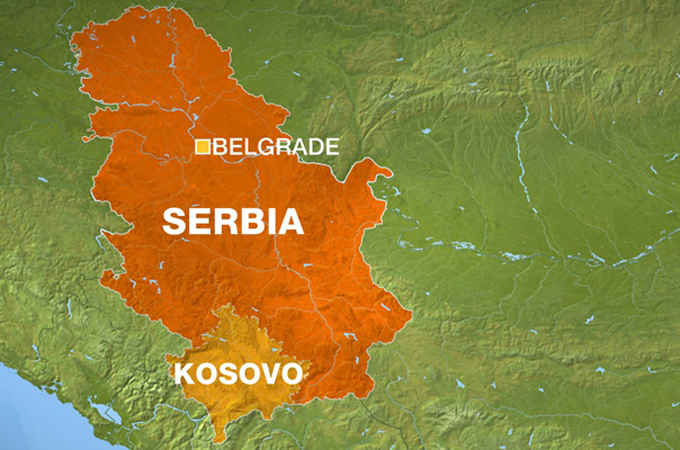