Police in Algeria‘s capital have fired tear gas and water cannon at thousands of students protesting against the appointment of a new interim president who is a part of the ruling order they have been seeking to remove.

The demonstration in central Algiers on Tuesday took place as parliament officially confirmed upper house Speaker Abdelkader Bensalah as acting head of state for the next 90 days to replace Abdelaziz Bouteflika, who resigned last week under pressure from the weeks-long, youth-led protests.

Footage showed security forces moving in on the demonstrators shouting “out with the system”, dousing them with pepper spray, shooting from a water cannon and using batons to break up the crowd.

Bensalah’s appointment is in accordance with Algeria’s constitution but the protesters who drove Bouteflika out after 20 years in office are unsatisfied with the move because he is a key ally of the former president and a seasoned establishment insider.

Bensalah, who cannot run in the polls, does not have the support of the opposition parties, which abstained from Tuesday’s session in parliament.

In a televised speech to the nation on Tuesday, the 77-year-old promised to organise free elections within his 90-day tenure and said he hoped they would result in a president committed to building a new Algeria.

Bensalah also announced plans to urgently create a “sovereign” body, with the help of the political class and civil society, to help lay down the required conditions for “honest and transparent” polls.

Bensalah is one of the three figures appointed by Bouteflika to key posts that protesters are demanding leave, dubbing them the “three Bs”. The others are Noureddine Bedoui, appointed last month as the head of government, and the chief of the Constitutional Council, Tayeb Belaiz, who would replace Bensalah in the case he resigned.

“Out with Bensalah, Belaiz et Bedoui!” protesters shouted on Tuesday as they massed at the square in front of the main post office, a symbol of the widespread rallies.

“Ninety days is merely enough time for the system to maintain itself and give itself a new figure, a new facade,” said Amina Afaf Chaieb, an Algerian activist taking part in weekly pro-Algerian democracy protests in France’s capital, Paris.

“What we want is a democracy and huge institutional reforms,” she told Al Jazeera.

“I highly doubt that Bensalah, who is the product of the system, would be able to steer us towards that. What we need is a transitional government, a transition phase to put us on the right track – the real republic of a democracy where all Algerians would participate as real citizens.”

Bouteflika, who suffered a debilitating stroke in 2013, yielded to the demands of protesters and renounced his bid for a fifth term in March, indefinitely postponing the presidential polls, originally planned for April 18.

That failed to appease protesters, who saw the moves as a trick to prolong his time in office. As protests continued, Algeria’s military joined the calls for Bouteflika’s departure, which ultimately led to his resignation on April 2.

Algeria’s influential military says the country’s people are entitled to a peaceful atmosphere but hasn’t commented yet on the appointment of Bensalah as interim president.

The Defense Ministry said in a statement on Tuesday that the army will work to ensure “the Algerian people’s legitimate right to enjoy total tranquility for the present and the future of the country”. 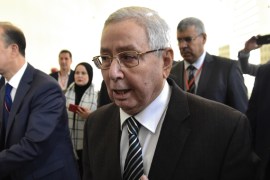 The legislature made the announcement live on TV confirming the Senate president will replace Abdelaziz Bouteflika. 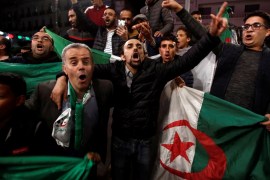 Is Bouteflika’s resignation enough for Algerians?

Algerian President Abdelaziz Bouteflika has resigned after mass protests against his 20-year rule. 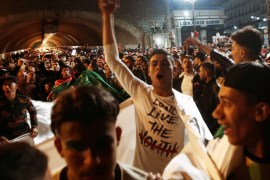 What is next for Algeria after Bouteflika’s resignation?

Counter-revolutionary forces are still far from being defeated, but there is much reason to be optimistic.