Activists demanding the exit of Sudan’s President Omar al-Bashir say a soldier has been killed while attempting to protect anti-government protesters from security forces trying to break up a rally in front of the leader’s residence.

In an apparent escalation of the four-month calls for political change, demonstrators in the capital, Khartoum, held a sit-in on Monday for a third straight day outside the complex, which also houses the headquarters of the Sudanese army.

Forces belonging to the widely-feared National Intelligence and Security Service (NISS) used tear gas, rubber bullets and live ammunition in a bid to disperse the protesters, according to the Sudanese Professionals Association (SPA), one of the groups spearheading the demonstrations.

Activists told the Associated Press news agency a soldier was killed on Monday while trying to protect those rallying against Bashir.

Speaking to Al Jazeera from Britain’s capital, London, SPA spokeswoman Sara Abdeljaleel said other army officers had also tried to defend the demonstrators on Monday and during previous clashes between civilians and the security services on Saturday and Sunday.

“In the last 72 hours, there has been a positive [development], to some extent, … that army officers are supporting protesters and protecting them from the National Intelligence and Security Service,” Abdeljaleel said.

Later on Monday, Interior Minister Bushara Juma said seven people were killed and 2,496 arrested during demonstrations in Khartoum and elsewhere over the weekend.

The latest deaths take the overall toll to 38 since the protests began, according to officials. Human Rights Watch says more than 50 people have been killed, including children and medics.

Protesters in recent days have been appealing for solidarity with the military, shouting slogans such as “Sudan is rising, the army is rising” and holding placards reading “The army and the people are one” to encourage soldiers to back their demands.

The demonstrations against the 75-year-old president were sparked by a government decision to triple the price of bread in December, but quickly escalated into broader protests against Bashir’s three-decade rule.

In response to the nationwide protests, Bashir in late February imposed a state of emergency which led to the protests largely being confined to Khartoum and Omdurman, the capital’s twin city.

But the movement now appears to have entered a critical new phase after the organisers last week urged protesters to take to the streets on Saturday, which marked the 34th anniversary of the overthrow of the government of Jaafar al-Nimeiri.

In Khartoum, the rally saw anti-government protesters reaching the army headquarters for the first time since the demonstrations erupted.

Analysts said the recent intensification of the protests signalled that Sudan was heading towards an imminent “crunch” point.

“Either the military will have to side with the regime and aide and abet the crackdown … or they will have to take a stand and at least ask for the president to resign,” Abdelwahab el-Affendi, a professor of politics at the Qatar-based Doha Institute, told Al Jazeera.

Bashir took power in a 1989 coup which toppled the elected government that had taken office following the military’s overthrow of al-Nimeiri four years earlier.

The president has acknowledged that the economic concerns raised by protesters are “legitimate”, but refused to step down.

Instead, he has overseen a crackdown on critics and argued his opponents should seek power through the ballot box when his term ends in 2020. 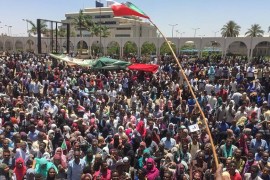 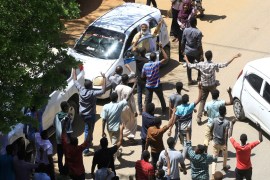