Tehran, Iran – Dozens of villages and towns have been evacuated in southern Iran as authorities issued warnings for a fresh round of flooding in the regions bordering Iraq, home to a number of rivers and dams.

Continuous floods that started in March have so far claimed 70 lives, destroyed infrastructures and displaced thousands of people across Iran.

On Saturday, Iraq officially closed the Chazabeh border crossing after Iranian authorities banned travelling and trade through the border amid flood warnings in the south Iranian province of Khuzestan.

Customs authorities of Khuzestan had called on trade companies on Wednesday to use another border crossing further south as a replacement, Iran’s state news agency IRNA reported.

The transit road to the border passes through lands surrounding Karkheh River that is expected to carry floodwaters as authorities ordered an emergency discharge in its dam to alleviate water pressure.

Khuzestan has three major rivers that pass through several villages, towns and cities, including Karoun River that cuts through the provincial capital Ahvaz.

Interior Minister Abdolreza Rahmani Fazli said flooding might affect about 400,000 people in Khuzestan out of more than 4.7 million residents of the province.

Heavy showers are also expected in the northeastern provinces, including the city of Mashhad.

The town of Poldokhtar bore the brunt of the disaster but floodwaters also submerged homes in numerous other villages in the province, while destroyed infrastructures slowed emergency relief efforts.

Deputy Minister of Roads and Urban Development Abdolhashem Hassannia said on Saturday roads to 275 villages in the province were blocked.

“During the floods, 200 bridges and 400 kilometres of roads were 100 percent destroyed,” Iran Labor News Agency (ILNA) quoted Hassannia as saying.

Lorestan’s representative in Parliament, Mohammadreza Malekshahi, said many residents who left their homes due to the flood have no place to sleep.

“The level of the damages left by the recent floods has been unprecedented during the past century,” ILNA quoted him as saying.

Much of the disaster occurred during Iran’s New Year holiday, Nowruz, when many Iranians travel, leaving thousands stranded either at home or at holiday destinations.

On March 25, flash floods killed dozens in the southern city of Shiraz, a popular destination for tourists. Heavy rainfalls caused the flood to spread through the city, move vehicles and wash away pedestrians.

Flooding also killed one person in Sar-Pol Zahab county in the western Kermanshah Province, where some residents still live in temporary cabins. They are trying to restore or rebuild homes and apartments damaged by a strong earthquake that took hundreds of lives last year.

In the northern Mazandaran Province, dozens of bridges were destroyed, while in other parts hundreds of villages were submerged by flood water.

Reports indicate that 95 out of 800 villages hit by the flood in Golestan have not yet recovered from the flood.

The Meteorological Organization forecasts more rainfalls in the northern region.

Many schools in Golestan are yet to open, even though national holidays ended on Friday.

The US campaign of so-called maximum pressure on Iran “is impeding aid efforts by #IranianRedCrescent to all communities devastated by unprecedented floods”, he wrote in a tweet.

The head of the Iranian Red Crescent Society, Ali Asghar Peyvandi, also criticised the US for blocking the Society for Worldwide Interbank Financial Telecommunication (SWIFT).

“We used a number of bank accounts connected to SWIFT, which we used for receiving international aid. But at the moment these accounts are subject to sanctions,” Iranian Students News Agency quoted him as saying.

“It’s impossible to transfer cash from other countries as well as the International Federation of [Red Cross and] Red Crescent Societies,” he said. 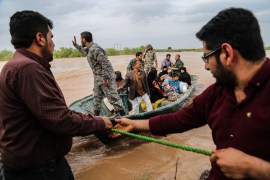 ‘Our dams are 95 percent full’: Iran braces for more flooding 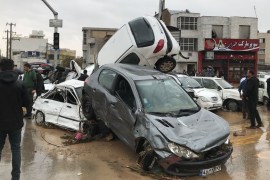 Iran flood: More than a dozen killed in flash flooding