Sudan’s ruling military council and the opposition alliance have reached an agreement in principle to form a new body to run the country until the next election.

The agreement was reached during a meeting on Saturday between the ruling Military Transitional Council (MTC) and the Declaration of Freedom and Changes Forces, an umbrella organisation of opposition groups.

Al Jazeera’s Mohamed Vall, reporting from the capital Khartoum, said while the agreement marked a breakthrough, it was still at an early stage and details had yet to be ironed out.

“There is still a lot of discord and disagreement between the two sides. The military wants 10 members on this council, three of them civilian, seven of them military. The opposition wants the council to be made up of 15 members, eight of them civilians and seven people from the military.

“So there are still some very difficult issues to discuss today and in the coming days. The first step that was taken yesterday was the easiest”.

Shams al-Din Kabashi, the spokesperson for the military council, told Al Jazeera that the “talks started with high spirits and great transparency”.

“Talks will continue and we are optimistic on reaching a final result that we can announce to the Sudanese people as soon as possible”.

After the fall of President Omar al-Bashir on April 11, following months of popular demonstrations against his 30-year rule, the MTC is now overseeing a two-year “transitional period” during which it has pledged to hold presidential elections.

‘Act with wisdom, not tension’

Opposition groups and protesters, however, have continued to stage large demonstrations to demand that the ruling military council hand over power to a civilian administration.

On Saturday the protesters clashed with members of the Popular Congress Party of late opposition leader Hassan al-Turabi outside a meeting in Khartoum, leaving 65 party members injured.

Meanwhile, the Sudanese opposition has rejected an African Union move to give the ruling military council a three-month deadline for handing power over to a civil administration.

Speaking in a press conference in Khartoum, al-Mahdi called on the MTC “to act with wisdom, not tension”.

“We hope that the civilian authority in the transition period will organize national, economic and international conferences”, he added.

Al-Mahdi stressed that the transitional period must follow free elections.

Al Jazeera’s Hiba Morgan, reporting from Khartoum, said protesters were continuing to keep the pressure on the military council.

“Over the past three weeks, more and more people have been arriving from different parts of the country to join the sit-in.

“They say they want civilians, and not the military, to be the ones who have the ultimate say on the shape of Sudan’s future”. 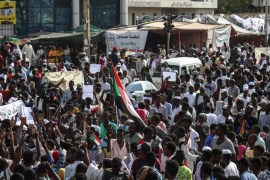 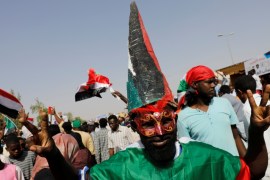 Huge rallies in Sudan as protesters vow to ‘protect revolution’

Tens of thousands of people join huge demonstrations in Khartoum demanding an end to military rule. 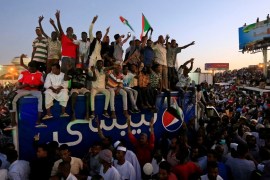