Cyclone Kenneth has killed at least one person and left a trail of destruction in northern Mozambique, destroying houses, ripping up trees and knocking out power, authorities said on Friday.

The cyclone brought storm surges and wind gusts of up to 280km per hour when it made landfall on Thursday evening, after killing three people in the island nation of Comoros.

It was the most powerful storm on record to hit Mozambique’s northern coast and came just six weeks after Cyclone Idai battered the impoverished nation, causing devastating floods and killing more than 1,000 people across a swath of Southern Africa.

The World Food Programme warned that Kenneth could dump as much as 600mm of rain on the region over the next 10 days – twice of that brought by Cyclone Idai.

One woman in the port town of Pemba died after being hit by a falling tree, the Emergency Operations Committee for Cabo Delgado (COE) said in a statement, while another person was injured.

In rural areas outside Pemba, many homes are made of mud. In the main town on the island of Ibo, 90 percent of the houses were destroyed, officials said. Around 15,000 people were out in the open or in “overcrowded” shelters and there was a need for tents, food and water, they said.

There were also reports of a large number of homes and some infrastructure destroyed in Macomia district, a mainland district adjacent to Ibo.

A local group, the Friends of Pemba Association, had earlier reported that they could not reach people in Muidumbe, a district further inland.

“Cyclone Kenneth marks the first time two cyclones have made landfall in Mozambique during the same season, further stressing the government’s limited resources,” he said in a statement.

Shaquila Alberto, owner of the beach-front Messano Flower Lodge in Macomia, said there were many fallen trees there, and in rural areas, homes had been damaged. Some areas of nearby Pemba had no power.

“Even my workers, they said the roof and all the things fell down,” she said by phone.

Further south, in Pemba, Elton Ernesto, a receptionist at Raphael’s Hotel, said there were fallen trees but not too much damage. The hotel had power and water, he said, while phones rang in the background. “The rain has stopped,” he added.

However, Michael Charles, an officer for the International Federation of the Red Cross and Red Crescent Societies (IFRC), said heavy rains over the next few days were likely to bring a “second wave of destruction” in the form of flooding.

“The houses are not all solid, and the topography is very sandy,” Charles said.

In the days after Cyclone Idai, heavy inland rains prompted rivers to burst their banks, submerging entire villages, cutting areas off from aid and ruining crops. There were concerns the same could happen again in northern Mozambique.

Before Kenneth hit, the government and aid workers moved around 30,000 people to safer buildings such as schools. However, authorities said about 680,000 people were in the path of the storm. 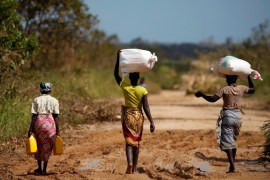 Local leaders in Nhamatanda district allegedly coerce women into having sex in exchange for ‘a bag of rice’. 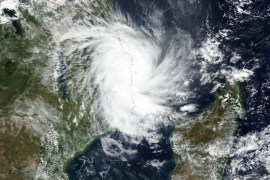