Batticaloa, Sri Lanka – The blast rocked the Protestant Zion Church just before Easter mass was to begin. Some survivors said they thought the church’s generator had caught fire and exploded.

It was only when they heard the news of a series of bombings in and near the capital, Colombo, on the western coast of Sri Lanka, that they realised their church had come under attack.

Sunday’s explosion in Batticaloa – about 300km east of Colombo – which authorities said was a suicide bombing, was the worst violence to hit the multiethnic city since the end of Sri Lanka’s bloody civil war a decade ago.

At least 26 were killed and more than 100 wounded.

Sobbing inconsolably after laying his son’s remains to rest on Monday, Thirumakaran said it was he who had welcomed the suspected attacker into the church.

He was not a familiar face at the church, said the pastor. But “I asked him to sit down and stepped outside the building. Moments later, the bomb exploded,” he said.

Inside the church were some 300 worshippers, including Esther, who only gave her first name. The woman, who was in her 30s, said some members of the congregation “grew suspicious” of the newcomer and tried to walk him out of the church.

Then, a powerful explosion rocked the building, blowing out windows and covering worshippers inside with ash. The floor was littered with bodies and body parts.

At the mortuary, grieving relatives said some of the victims’ bodies were burned beyond recognition. They reported multiple deaths in many families.

A total of 290 people died in the coordinated bomb blasts across the country, the first five of which ripped through churches and high-end hotels in and near Colombo at around 8:45am (03:15 GMT).

No group has claimed responsibility, but Rajitha Senaratne, minister for health, on Monday accused a little-known Muslim group called the National Thowheed Jamath.

For many, Sunday’s attacks evoked the memory of Sri Lanka’s nearly three-decade civil war between ethnic Tamil separatists and government forces. There was a lot of violence in Batticaloa, particularly in the first decade of the conflict, but calm has prevailed here as in the rest of the country since the war’s end.

Activists, faith leaders and politicians worry the Easter Sunday blasts could inflame communal tensions in Batticaloa as well as in Sri Lanka, where nearly three-quarters of the population are Sinhalese Buddhists. Tamils, who are mostly Hindu, account for nearly 15 percent, while Muslims and Christians make up 10 percent and six percent of the population, respectively.

The Eastern province, where Batticaloa is located, is home to equal numbers of Sinhalese, Tamils and Muslims.

Many of the city’s residents questioned why Batticaloa was the only location outside the capital to have been hit. There were also questions on why the Eastern church attacker had targeted a small Protestant congregation, while the others targeted Roman Catholic churches.

Ameer Ali Shihabdeen, a politician who represents Batticaloa in Sri Lanka’s parliament, described relations between the various communities in the decade after the war as “generally peaceful”, despite recent tensions between Sinhalese Buddhists and Muslims.

“We are very shocked. We are all asking the same question – what is the purpose of these attacks?”

‘We know the pain’

Akram Naleemi, an Islamic scholar in the neighbouring town of Kattankudy, where 147 Muslim men and boys were killed in 1990, said: “We know the pain these kinds of killings cause.”

The Muslim community was “embarrassed” that the suspected attackers were linked to them, he said, adding: “There has never been such an incident between Christians and Muslims in the past here. We are currently thinking about how we can help the affected communities.”

On Tuesday, a silence hung over the city.

And as families of victims hurried to bury the dead, faith leaders appealed for unity.

“It is animalistic to instigate violence against religious places of worship. This is an attack against humanity,” said Bishop Joseph Ponniah. 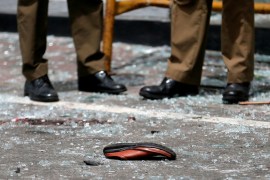 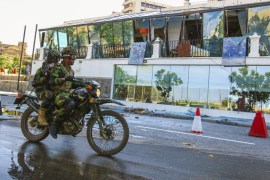