Sri Lanka‘s government was “aware of information regarding a possible attack” before a series of deadly bomb blasts rocked hotels and churches in the capital Colombo and two other cities, according to the country’s prime minister.

Ranil Wickremesinghe, speaking to reporters late on Sunday, acknowledged that “information was there” about possible attacks.

“We must also look into why adequate precautions were not taken,” he said.

The coordinated assaults, which killed at least 290 people and wounded almost 500 others, was the worst violence in the Indian Ocean island nation since its civil war ended a decade ago.

A police spokesman said 13 suspects were arrested in connection to the bombings.

Wickremesinghe said “the names that have come up are local”, but said investigators will look into whether the attackers had any “overseas links”. World leaders offered help in the probe, he added.

Ties between the two leaders are at an all-time low following Sirisena’s sacking of Wickremesinghe in October. The move triggered a weeks-long political crisis that ended only when the Supreme Court overturned that decision.

“The president retained charge of the police, but the prime minister said neither he nor his ministers had been informed of this information that was available,” she said.

For his part, Sirisena earlier on Sunday said he ordered a special police task force and the military to investigate who was behind the attacks and their agenda.

The government declared a curfew in Colombo and blocked access to social media messaging sites, including Facebook and WhatsApp. The military was deployed and security was stepped up at Colombo’s international airport.

“We believe these were coordinated attacks, and one group was behind them,” he said. Most of the explosions were believed to have been suicide attacks.

Six nearly simultaneous blasts took place in the morning in Colombo at St Anthony’s Shrine, just as church services began, and the Cinnamon Grand, Shangri-La and Kingsbury hotels. The powerful explosions collapsed ceilings and blew out windows, killing worshippers and hotel guests in one scene after another of smoke, blood, broken glass, screams and wailing alarms.

Victims were carried out of blood-spattered pews.

“People were being dragged out,” said Bhanuka Harischandra of Colombo, a 24-year-old founder of a tech marketing company who was going to the city’s Shangri-La Hotel for a meeting when it was bombed. “People didn’t know what was going on. It was panic mode.”

He added, “There was blood everywhere.”

After a lull of a few hours, two more explosions occurred at St Sebastian Catholic church in Negombo, a mostly Catholic town 37km north of Colombo, and at the Protestant Zion church in the town of Batticaloa, about 300km to the east.

Three police officers were killed while conducting a search at a suspected safe house in Dematagoda, on the outskirts of Colombo, when its occupants apparently detonated explosives to prevent arrest, according to the defence minister.

Most of those killed were Sri Lankans. But the three hotels and one of the churches, St Anthony’s Shrine, are frequented by foreign tourists, and Sri Lanka’s Ministry of Foreign Affairs said the bodies of at least 27 foreigners from a number of countries were recovered.

The US said “several” of its citizens were among the dead, while Britain and China said they, too, lost nationals.

The Archbishop of Colombo, Cardinal Malcolm Ranjith, called on Sri Lanka’s government to “mercilessly” punish those responsible “because only animals can behave like that”.

The scale of the bloodshed recalled the worst days of Sri Lanka’s 26-year civil war, in which the Tamil Tigers, a rebel group from the ethnic Tamil minority, sought independence from the Buddhist-majority country. During the war, the Tigers and other rebels carried out a multitude of bombings. The Tamils are Hindu, Muslim and Christian.

Mangala Karunaratne, a resident of Colombo, said: “During the 30 years of civil war we had lots of explosions in Colombo. We are used to the airport getting blown up and the central bank, things like that. But it’s been 10 years of peace and we got used to that. So that’s why it’s really surprising and shocking.”

“The range of these attacks and the concentration on the Christian churches and then the hotels as well suggest we are dealing with something really quite horrible,” he said.

Two Muslim groups in Sri Lanka condemned the church attacks, as did countries around the world. Pope Francis expressed condolences at the end of his traditional Easter Sunday blessing in Rome.

“I want to express my loving closeness to the Christian community, targeted while they were gathered in prayer, and all the victims of such cruel violence,” Francis said. 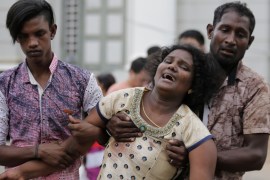 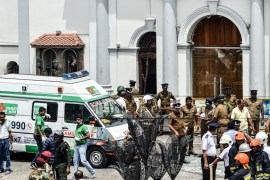