Gunfire and blasts echoed through downtown Tripoli in the small hours of Friday around the disused international airport and the Ain Zara district, the Reuters news agency has reported.

Renegade General Khalifa Haftar‘s planned push into the capital appears stalled on the outskirts of the city as his Libyan National Army (LNA) forces continued to skirmish with those of the internationally recognised government.

The fighting between LNA and troops loyal to the Tripoli government of Prime Minister Fayez al-Serraj has displaced 9,500 people in the capital, the United Nations (UN) said.

But the World Health Organization (WHO) said it had made contingency plans in case “thousands if not hundreds of thousands” were displaced.

At least 75 people have been killed since fighting began a week ago, and 323 have been wounded. The casualties included seven civilians killed and 10 wounded, according to Syed Jaffar Hussain, the WHO representative in Libya.

Haftar’s push on Tripoli in Libya’s northwest is the latest turn in a cycle of factional violence and chaos dating back to the 2011 uprising that overthrew long-time ruler Muammar Gaddafi.

After sweeping up from the desert south, the LNA has been held up in the southern suburbs of Tripoli, about 11km from the centre.

The UN humanitarian agency OCHA said in a report on Thursday that 3,500 people had left their homes in Tripoli in the previous 24 hours, and that 90 percent of those who had requested evacuation could not be moved to comparatively safer areas.

Meanwhile, WHO’s Hussain told a Geneva news briefing by telephone from Tripoli that he feared outbreaks of tuberculosis, measles and diarrhoeal diseases due to poor sanitation, especially among the displaced.

The WHO has delivered trauma kits and medicines to hospitals.

“These supplies will last for two weeks, the acute phase,” he said.

WHO has contingency plans to deal with any potential mass displacement caused by the fighting.

Late on Thursday, the European Union called for an immediate ceasefire and for the LNA to withdraw its troops from Tripoli.

In a statement, the EU’s High Representative, Federica Mogherini, said that the military attack launched by the LNA on Tripoli is endangering civilians, including migrants and refugees, and disrupting the UN-led political process, with the risk of serious consequences for Libya and the wider region.

A planned UN conference to discuss a constitutional framework for elections as a means of ending the North African country’s eight-year political crisis that was to be held this week has been postponed.

As well as the toll on civilians, the renewed conflict also threatens to disrupt oil supplies.

The head of Libya’s state oil company, Mustafa Sanalla, warned that the renewed fighting in the country “could wipe out” the North African nation’s crude production, according to a retweet by National Oil Corp (NOC).

The conflict also threatens to increase migration across the Mediterranean to Europe and encourage traffickers to exploit the chaos. Libya is the main transit point for migrants who have poured into Europe in recent years, mostly trafficked by smuggling gangs.

The LNA forces swept out of their stronghold in eastern Libya to take the sparsely populated but oil-rich south earlier this year before heading towards Tripoli, where Serraj’s UN-backed government sits.

Haftar was among the officers who helped Gaddafi seize power in a 1969 coup before parting ways with him later. Critics call Haftar another strongman in Gaddafi’s mould.

He has so far resisted UN pressure to accept a power-sharing settlement to stabilise Libya. 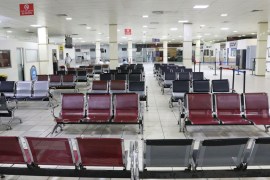 Attack on airport comes less than a week after the UN brokered a truce between rival armed groups in Libyan capital. 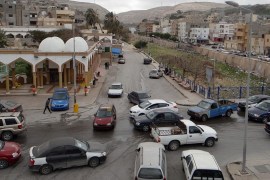 Government of National Accord calls on the UN Security Council to probe the attack that killed at least 17 civilians.

Rights body slams the ‘culture of impunity’ after documenting third case of killings in Benghazi since July.