Lagos, Nigeria – Four years ago, hundreds of thousands of people had thronged the streets of Nigeria to celebrate Muhammadu Buhari‘s historic win in the presidential election in 2015, hoping the country’s problems would end soon.

The former army general had defeated rival Goodluck Jonathan by more than two million votes on the strength of his grassroots appeal and his military background.

However, with the 2019 election taking place on Saturday, Buhari’s supporters are questioning his time spent in the office.

“I don’t want to vote for the president [Buhari] again. I don’t think anything will change,” Christopher Akanbi, a businessman in the commercial capital, Lagos, told Al Jazeera.

The 52-year-old voted for Buhari in 2015. It was the first win by an opposition candidate since Nigeria’s return to civil rule.

“I campaigned with everything I had. I encouraged my family, convinced my friends and even made enemies because of my role when he defeated Jonathan,” said Akanbi. “He has disappointed many of us and I can’t support him any more.

“My support is now for the opposition candidate. Atiku [Abubakar] is his own man and takes responsibility for his actions, unlike Buhari who has been hijacked by a few friends and family.”

Buhari assumed office on the heels of the abduction of more than 200 schoolgirls from Chibok in the country’s northeast Borno state by the Boko Haram armed group.

When he promised to fix the pervading insecurity, very few people doubted his ability, given his military track record.

Some dismissed it as campaign sloganeering, but his supporters did not relent.

Shortly after he was sworn in, Buhari relocated the country’s military command from Abuja to Maiduguri, the birthplace of Boko Haram.

The military made some gains, recovering lost territories. But the honeymoon did not last long. Boko Haram regrouped and carried out vicious attacks, overrunning military bases and killing security operatives.

Herder-farmer clashes erupted across some central states, leading to the killing of hundreds and displacement of thousands.

In recent months, these clashes have reduced but some fear they may resume after the elections.

Before taking office in 2015, Buhari campaigned on a promise of delivering annual economic growth of about 10 percent annually. But the realities of global oil markets collided with that pledge.

Nigeria is Africa’s top oil producer. Like many petroleum-rich states, it depends heavily on oil for foreign currency and income and has failed to sufficiently diversify its economy to guard against price shocks.

When oil prices started to plunge in 2014, Nigeria was ill prepared for the blow to its finances. Attacks by armed groups on oil facilities further exacerbated the pain by lowering output.

By 2016 the country had slipped into a deep recession that lasted more than a year.

“Unfortunately there was a recession. But the indicators had always been there,” Muhammad Abdullahi, an economist, told Al Jazeera.

“Failure to plan for the rainy day was met with stiff resistance by the governors of the era, which meant that the country had no buffer when oil prices slumped.”

The National Bureau of Statistics reported on Tuesday that Nigeria’s economy grew 1.93 percent last year. But the low-growth recovery has failed to keep pace with rapid population growth.

Unemployment has surged since 2015, while per capita incomes adjusted for inflation have fallen.

“The government’s economic recovery and growth plan has seen a return to almost two percent growth, but given our population-growth rates, we need a minimum of 3.5 percent to witness positive growth,” said Abdullahi.

According to World Poverty Clock, Nigeria overtook India last year as the country with the largest number of extreme poor, with roughly half the population – some 87 million people – living on less than $1.90 a day.

Some firms have found it tough to operate in the country and ceased trading.

But Buhari supporter Ayodele Segun told Al Jazeera some of the firms that closed shop either existed on paper only or were uncompetitive and overly reliant on government patronage.

“Most of them are briefcase companies [not structured or existing on paper only],” said Segun.

The anti-corruption commission has had a busy time prosecuting alleged corrupt individuals and politicians.

Some of them were given jail sentences, while others ended as mere media trial after suspects were acquitted.

Corruption charges against some public officials and politicians have been put on hold as some of the accused are now part of Buhari’s campaign team.

Buhari has blocked perceived leakages in government, for example, faulty contract-bidding process and lack of financial documentation. This has made it more difficult to indulge in brazen corrupt practices.

The opposition, however, said the president’s campaign against corruption is selective and targeted only those outside the ruling party.

He has been accused of granting amnesty from prosecution to politicians who join the ruling All Progressives Congress.

Buhari’s challenger Atiku Abubakar, a businessman, has been campaigning on the strength of his experience in the private sector to fix the economy and create more jobs.

But the president says solving the problem of corruption was key.

“A policy programme that does not have fighting corruption at its core is destined to fail,” Buhari said in a social media post on Sunday.

“The battle against graft must be the base on which we secure the country, build our economy, provide decent infrastructure and educate the next generation.”

He said, “The vested interests at play can make this fight difficult.”

“By way of their looting, the corrupt have powerful resources at their disposal. And they will use them. For, when you fight corruption, you can be sure it will fight back.” 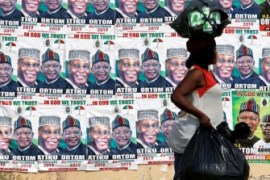 We ask Nigerian journalists what to watch for as crunch election approaches. 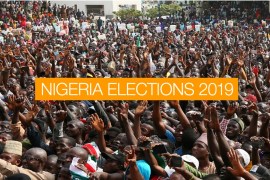