Greece has said it will expel the Libyan ambassador to the country, angered at an accord signed on November 27 between Libya and Turkey mapping out a sea boundary between the two countries close to Crete.

The Libyan-Turkish agreement could complicate Ankara’s disputes over offshore energy exploration in the Mediterranean with nations including Greece, which sees the move as infringing its sovereign rights.

Greece and Turkey are at odds over various decades-old issues ranging from mineral rights in the Aegean Sea to ethnically-split Cyprus.

“Expelling an ambassador just because of the [agreement] that we signed is not a mature behaviour in diplomacy. This is outrageous,” Turkey’s Foreign Minister Mevlut Cavusoglu told reporters in televised comments during a visit to Rome.

Greece does not have diplomatic representation in Libya, but Libya would have reciprocated the move if it did, he said.

Why is Greece angered?

From a legal perspective, Athens says Turkish and Libyan areas of sovereignty should not touch because Greece lies between them.

Al Jazeera’s John Psaropoulos, reporting from Athens, said Greece was taken by surprise by the accord, after Libyan officials assured them the deal would not be signed off.

“It was known that these talks were going on, the Greeks were concerned, but off-the-record discussions that the foreign ministers had, that the ambassador had with counterparts here, were that it was not a realistic prospect,” he said.

“[Greek officials] believe that there is a certain amount of trickery on the Libyan part.”

Greece has been briefing its allies in NATO, the EU and the Organization for Security and Co-operation in Europe (OSCE), along with China, Russia and Israel, about the issue.

“It is working very hard to internationalise the issue as quickly as possible and get as many countries … to agree this violates [maritime] laws,” said Psaropoulos. “We have been told, off the record, the Turkish side has been informed that should Turkish exploration vessels attempt to enter the disputed maritime area, they will be fired upon and sunk.”

Greece has sent military enforcement to Crete Naval Base.

Libya’s neighbour Egypt dismissed the deal as “illegal”, along with Cyprus.

“Egypt has a good relationship with Cyprus and Greece, and a terrible relationship with Turkey,” said Athens-based security analyst Efthymios Tsiliopoulos told Al Jazeera. “UNCLOS, the United Nations Convention on the Law of the Sea, specifically states that islands do have an exclsuive economic zone. The way Turkey sees it, it chooses to make up its own version of what it believes to be the law of the sea, non-corroborated by any international forum.”

The memorandums of understanding were signed after Turkish President Recep Tayyip Erdogan held a closed meeting with the internationally-recognised Libyan government of Prime Minister Fayez al-Sarraj in Istanbul, the state-run Anadolu Agency reported.

The move comes as Tripoli, the seat of the Government of National Accord (GNA), has been battling forces backed by renegade military commander Khalifa Haftar.

More than 1,000 people have been killed since April when Haftar’s eastern-based, self-styled Libyan National Army (LNA) launched an offensive to seize Tripoli. 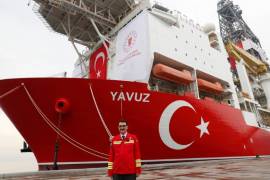 Turkey is threatening to send a drilling ship to waters claimed – and defended – by Greece. 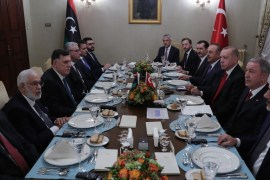 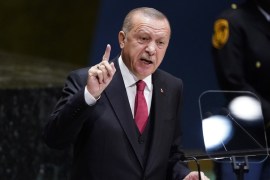 Erdogan: ISIL fighter trapped near Greece ‘not our problem’

Turkey will continue to deport captured ISIL members whether home countries ‘take them or not’, president warns.