At least 53 soldiers and a civilian have been killed in an attack on a military post in northeast Mali, according to the country’s communication minister.

The attack, one of the deadliest against Malian forces, took place in Indelimane, in the Menaka region close to the border with Niger, Yaya Sangare wrote on Twitter on Saturday.

He said the situation had been brought “under control”, adding: “A search and the process of identifying the bodies is continuing.”

Ten survivors were found at the outpost, which suffered “significant” damage, according to Sangare, who did not give further details.

The Islamic State of Iraq and the Levant (ISIL or ISIS) armed group claimed responsibility for the attack via its media arm Amaq, without citing evidence.

“Soldiers of the caliphate attacked a military base where elements of the apostate Malian army were stationed in the village of Indelimane,” the group said.

Al Jazeera’s Mohammed Vall, who has reported extensively from Mali, said the attack involved at least three suicide bombers who detonated explosives inside the military camp, according to security sources.

He added the death toll could rise.

The Malian government earlier condemned the “terrorist attack”, saying it had left numerous dead or wounded but without giving a precise toll.

“Reinforcements have been dispatched to secure the area and hunt down the attackers,” it said in a statement.

The attack comes a month after two attacks killed 40 soldiers near the border with Burkina Faso, but several sources told AFP news agency the death toll had been downplayed. 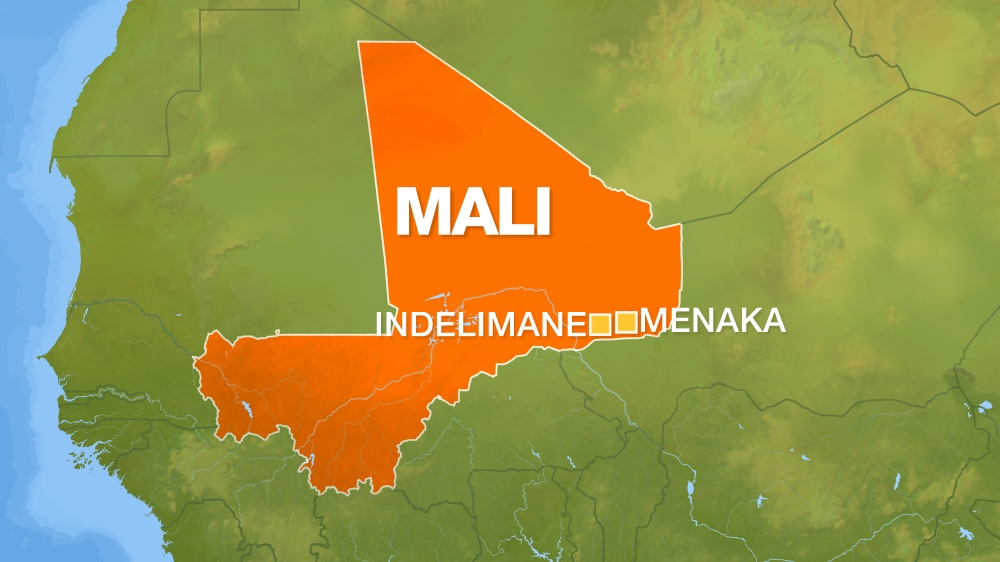 Mali’s army has been struggling in the face of regular flare-ups of violence that have spread from the arid north to its centre, an ethnically mixed and volatile region.

The recent attacks are also a major blow for the so-called G5 Sahel force – a much-trumpeted initiative under which five countries created a joint 5,000-man anti-terror force – and for France, which is committed to shoring up the fragile region.

Northern Mali came under the control of al-Qaeda-linked fighters after Mali’s army failed to quash a rebellion there in 2012.

A French-led military campaign was launched against the fighters, pushing them back a year later.

But the armed groups have regrouped and widened their hit-and-run raids.

“Those groups are gaining more momentum, organising themselves better and making it more difficult for the peacekeepers and other soldiers – particularly the Malian army – to control that region,” Al Jazeera’s Vall said.

The violence has also spilt over into Burkina Faso and Niger where fighters have exploited existing inter-communal strife, leaving hundreds dead.

Paul Melly, a consulting fellow at Chatham House’s Africa Programme, described the groups operating in the region as “highly mobile” and said countering their threat was a “huge challenge” for security forces.

“Yesterday’s attack is only the latest in a series of brutal attacks that have often culminated in the massacre of any defeated garrison, attacks clearly aimed at destroying the morale of national armies in the Sahel,” Melly told Al Jazeera.

“The answer cannot be security alone. Development and better public administration are key – but of course that is hard to provide when government personnel are at risk of targeted killing and it is not safe for development agencies to operate,” he added.

Al Jazeera’s Vall, meanwhile, said the “unique” geography of the region was also adding to security forces’ struggles to contain the armed groups.

“It’s a desert and there are no real borders between the countries of the Sahel, so it is difficult to control thousands and thousands of kilometres of desert,” Vall said.

“There are no fences, no outposts for the armed forces, most of them are encamped inside the cities in northern Mali … primarily concerned with the safety of the personnel and not with fighting in the desert against those groups,” he added.

“So there is an asymmetry in that war between groups that can launch hit-and-run attacks and then hide … and between the regular armed forces who use conventional means.”