A plush hotel in central Berlin is set to become the latest venue to host diplomatic efforts aimed at kick-starting a stalled peace process in ethnically divided Cyprus to resolve one of the world’s most intractable conflicts.

United Nations chief Antonio Guterres on Monday evening will host a dinner attended by Greek Cypriot leader Nicos Anastasiades and his Turkish Cypriot counterpart, Mustafa Akinci, in an attempt to outline the next steps towards a potential resumption of formal talks between the two sides.

Turkey still maintains tens of thousands of soldiers on the small eastern Mediterranean island, while forces belonging to the longest-serving peacekeeping mission in UN history patrol the so-called “Green Line” – a 180km (112 mile) buffer zone between the Turkish Cypriot north which in 1983 declared itself to be a republic and is recognised only by Ankara, and the Greek Cypriot south, the seat of the island’s internationally recognised government.

Although leaders on both sides have long agreed, in principle, to unite Cyprus as a “bizonal, bicommunal federation”, there are different understandings of what that would entail, including disagreements over the sharing of power, the return of displaced Cypriots and their property claims as well as the future role of Greece, Turkey and Britain, the three guarantor powers of Cyprus’s independence assigned under a 1960 treaty.

Over the decades, numerous attempts at reunification have failed, the latest being in July 2017 in the Swiss resort of Crans Montana when UN-sponsored negotiations broke down in acrimony, a dramatic ending to what was widely seen as the most promising effort in years to find a solution to the long-lasting problem.

At the time, a seemingly forlorn Guterres called on Anastasiades and Akinci to reflect on the collapse of the talks and reaffirmed the UN’s readiness to reactivate the peace process should the two sides “jointly decide to engage in a process with the necessary political will”. 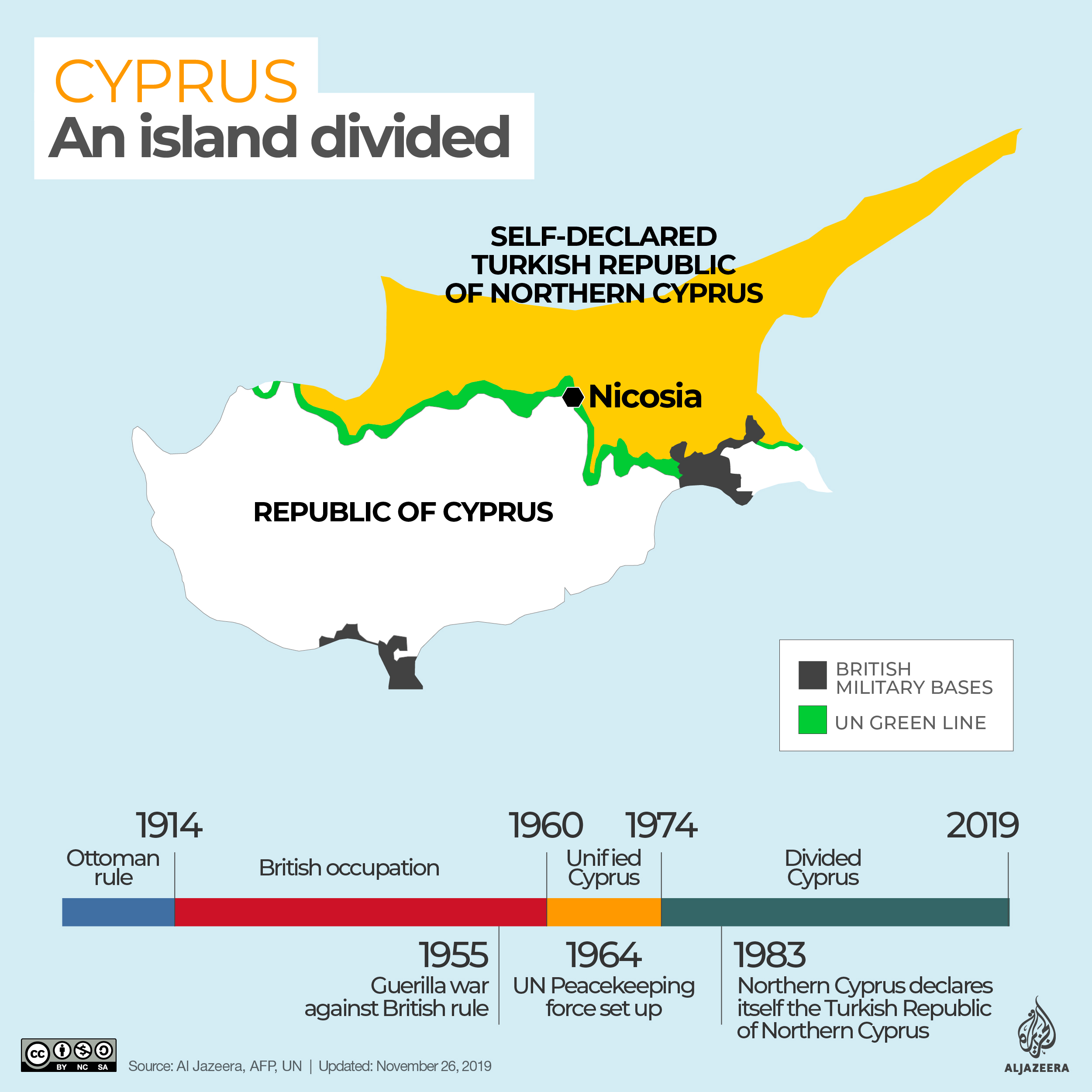 More than two years later, however, no such signs appear to have emerged.

“It seems like that the two sides are a step back compared to where they travelled in Crans Montana,” Ahmet Sozen, a professor of political science and international relations at Eastern Mediterranean University, told Al Jazeera.

Sozen cited Guterres’s proposed six-point framework from 2017 that tried to bring a package solution to outstanding issues, including political equality, effective participation in federal decisions, the number of troops and the role of the guarantor powers in a future federal state.

“The Greek Cypriot side definitely moved away from the agreements on the political equality and the effective participation of the two communities in decisions in the federal organs. Meanwhile, it seems like Turkey backtracked from its flexible position it adopted vis-a-vis the number of troops and the rights of intervention as a guarantor on the island,” Sozen said.

Christophoros Christophorou, a political analyst based in Nicosia, agreed that the starting point is “way back” compared to Crans Montana, which “in any way is not the subject of the meeting” in Berlin.

“Among others, because of the principle that ‘nothing has been agreed if not everything is agreed’, which allows the parties to raise new issues or revise their positions, even agreed ones”.

Days before the Berlin meeting, to be held in the German capital’s Adlon Kempinski hotel, Guterres acknowledged that trust between the two sides remained low.

The UN secretary-general said in a report last week the climate has “deteriorated further” despite “repeated calls” on both leaders to better inform the island’s communities about the “contours of a settlement” and to improve the overall conditions and atmosphere for the process.

He blamed the sides’ “disagreement over the terms of reference” which he said is “prolonging the stalemate”, as well as “increased tensions in and around Cyprus”.

The island’s internationally recognised government and the EU accuse Turkey of violating Cyprus’s maritime economic zone by drilling off the island, while Ankara insists it is operating in waters on its own continental shelf or in areas where the Turkish Cypriot community has rights.

Earlier this month, the European Union – of which the Republic of Cyprus is a member – decided to impose economic sanctions against Turkish oil and gas drilling activities in waters off the island, drawing sharp criticism from Ankara which said it would not stop its exploration activities.

“Unfortunately, the newly discovered natural gas in the eastern Mediterranean became a new source of tension rather than an area of cooperation between the two sides,” Sozen said.

“The Greek Cypriot-dominated Republic of Cyprus strictly treats this issue as an issue of a sovereign government and refuse to negotiate it in the peace talks,” Sozen said. “As a retaliation to this inflexible position, Turkey has been so far escalating the tension in the eastern Mediterranean by deploying its navy and its own exportation and drilling vessels in the disputed areas.”

‘Cyprus too small to be divided’

Despite the seemingly unfavourable conditions for the holding of any meaningful negotiations, analysts do not rule out progress in the informal Berlin talks.

“The more optimistic would be a general framework on the terms of reference for the resumption of talks; a smaller step would be in the form of progressing a little bit more from the present positions in that direction.”

Equally cautious, Sozen said the involvement of Greece, Turkey and the UK, “perhaps in a five-partite meeting soon after the tripartite Berlin meeting”, was needed for any serious progress. “[Not] seeing the active engagement of the guarantor powers naturally lowers the expectations for a speedy settlement of the Cyprus issue.”

For their part, both Akinci and Anastasiades said the meeting represented a chance to find a way forward.

“We came here with the hope and intention to make a positive step forward towards a solution to the Cyprus problem,” Akinci, president of the self-declred the Turkish Republic of Northern Cyprus, told reporters, saying participants would discuss a road map and exchange views on the next steps.

Anastasiades, meanwhile, sees the meeting as an opportunity to resume talks as soon as possible, his spokesperson said on Friday, even as the president of the Republic of Cyprus was earlier quoted as telling former Turkish Cypriot leader Mehmet Ali Talat that the meeting would be in vain and a waste of money.

Still, the upcoming talks have re-energised the island’s pro-unification movement, with hundreds of Cypriots from across the divide holding a rally on Friday evening

“Cyprus is too small to be divided, but big enough to welcome us all,” they reportedly said in a letter submitted to Anastasiades and Akinci, urging them to restart formal talks.

In a separate open letter to Guterres, Unite Cyprus Now, a multi-communal group advocating for a solution to the Cypriot problem, called on the leaders to show “political courage” and take the “final step”.

“The continuation of the status quo is only leading to increased tension in and around Cyprus and will only bring about more instability in the region.

“This will not only have dangerous consequences for us Cypriots, but everyone.”