Beirut, Lebanon – A month has passed since people in Lebanon first took to the streets in what quickly became a nationwide protest movement against a ruling class seen as corrupt and incapable of running the country.

Hundreds of thousands of people have taken part, demanding an end to Lebanon’s political system where power is apportioned among ethnic and religious groups, and the formation of an independent technocratic government to tackle the country’s spiralling financial crisis and improve access to basic services, such as electricity and water.

It began on October 17 with a small demonstration in Beirut over proposals for new taxes, including on WhatsApp calls, which soon spread to dozens of towns and cities across the country. Protesters lit fires on main roads and blocked highways, while banks, schools and universities closed. Normal life was put on hold as a new revolutionary reality dawned.

By the fourth day, hundreds of thousands of protesters filled the country’s streets, calling for the downfall of the country’s post-civil war sectarian politicians. Many people from across Lebanon’s civil-war-era sectarian and class divides found themselves suddenly on the same side, with a common enemy.

“All of them means all of them,” they chanted, in a catch-all aimed at politicians. “We are the popular revolution, you are the civil war.”

The government instantly made concessions. A tax on WhatsApp calls that sparked the protests was cancelled the same night, four ministers resigned days later, and the Cabinet promptly endorsed a budget free of any new taxes, and with a deficit reportedly close to zero.

Protests persisted, and caretaker Prime Minister Saad Hariri announced his resignation on October 29, citing pressure from the street and political deadlock over a Cabinet reshuffle.

In the time since, cultural and social shifts have begun to crystalise. School and university students have taken to the streets at a scale not seen since Lebanon’s 15-year civil war broke out in 1975. Meanwhile, professionals have begun to create alternative representative bodies and unions to those that have been coopted by the parties in power.

But at the same time, institutional change, a core demand of protesters, has not materialised. As the second month of protests commences, politicians have failed to respond to demands for a government of independent experts, a new non-sectarian electoral law and early elections.

When President Michel Aoun last week urged demonstrators to go home, adding that those who did not see any decent people in Lebanon should “emigrate”, protesters were incensed.

‘They haven’t heard us’

The atmosphere on the streets has become increasingly frustrated, while Lebanon’s economy and finances slip further towards collapse, with fuel shortages widespread and importers warning that basic foodstuffs may soon be at risk.

At the same time, security forces have increasingly responded in a heavy-handed manner, bloodying protesters who block main roads and arresting at least 20 on Thursday night alone.

“We’ve been here for 31 days and they still haven’t heard us,” Tarek Hattoum, a 23-year-old pre-med student, told Al Jazeera from Beirut’s Martyr’s Square on Saturday. “At this point, I think it’s clear they won’t give us what we want, we have to find better ways to take it [ourselves],” he said.

“The longer they keep us in the streets like this, the more likely we are to go towards violence.”

The protests have been largely peaceful, although some clashes have broken out with security forces, while a group of Hezbollah supporters forcibly broke up a protest camp in late October.

There have been five confirmed protest-related deaths since the uprising began, with the latest coming on Tuesday night when an army officer shot dead a man protesting on a main road south of Beirut. The father of three, Alaa Abou Fakher, died in front of his wife and child.

Candle-light vigils were held for him in towns and cities across the country, in the most recent display of cross-sectarian unity, and people have been called to participate in large protests on Sunday, dubbed the “Sunday of Martyrs”.

But displays of unity have not always been smooth. On Saturday, a bus that was supposed to drive from Akkar in the north to Tyre in the south was stalled at the southern city of Sidon, after some protesters alleged it was funded by “embassies”.

The bus eventually turned around and headed back to Beirut at night, rather than continuing its course south. The US embassy in Beirut weighed in, tweeting “We heard the rumors and no, the U.S. Embassy is not financing ‘the revolution bus.'”

With few signs that either the politicians or the protesters are prepared to make concessions, the uprising looks set to enter an increasingly difficult phase.

Khalil Gebara, a professor of economics at the Lebanese American University, told Al Jazeera that the engagement of students and youth may yet prove to be one of the uprising’s greatest assets.

“What you are seeing today at the level of the youth and students is a phenomena that you haven’t seen since the civil war,” Gebara said. “The question is, which way will these students vote?”

“If we have early elections, it may represent a real turning point in the history of Lebanese politics because we may see a real change if this momentum is capitalised upon,” he said.

“If it takes a lot of time, you fear that mainstream parties will co-opt and dilute this momentum.”

Fatima al-Sheikh, a 20-year old freshmen student walking towards Beirut’s Riad al-Solh square on Saturday, said she believed decisive change would come whenever the next elections were held.

“I think it’s impossible that we will bring them back [at the next poll]” she said, as she removed a Lebanese flag from her backpack and unfurled it.

“We grew up thinking that they (sectarian leaders) looked out for our interests, even though we knew they were corrupt and sectarian and oppressive. But now we feel that with our hearts, and we can’t go back from that.” 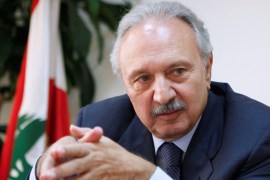 Reports of the former finance minister’s nomination sparked protests in Beirut and Tripoli. 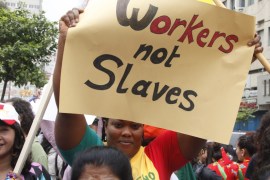 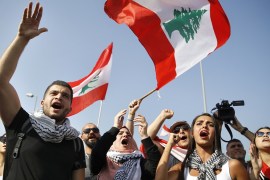