Madrid, Spain – Spain‘s ruling Spanish Socialist Workers’ Party were set to finish first in the country’s general election, but further away from a majority in what could be an even more fragmented parliament, according to preliminary projections.

The opinion poll by GAD3 for public broadcaster RTVE published shortly after mainland voting ended at 8 pm (1900 GMT) on Sunday showed no clear advantage for either the leftist or the rightist bloc, pointing to a stalemate that could yet again fail to produce a working government.

The Socialists were pegged at just over 27 percent and poised to win between 114 and 119 seats, down from 123 they secured in the 350-seat house in April, according to GAD3.

The conservative People’s Party (PP) was seen second with a projected 85-90 seats.

The far-right Vox was seen as the biggest gainer, with GAD3 forecasting it to more than double its representation from the 24 seats with which it debuted in parliament in April.

The poll was based on the voting intentions of around 14,000 people collated in the days leading up to the election – Spain’s second national ballot this year and fourth in four years.

Voters feel pessimistic about the chances of a cross-party alliance taking power and ending the deadlock.

After the last general election in April, repeated attempts by the Spanish Socialist Workers’ Party (PSOE) to convert their current caretaker minority government into something more permanent fell on stony ground, first when the liberal Ciudadanos party rejected any kind of pact, and then when negotiations with the left-wing Unidas Podemos formation petered out.

“We are in a labyrinth,” Spanish Premier Pedro Sanchez said in a recent interview, before arguing in another that anything but voting for his party on Sunday “will continue the deadlock”.

‘People are fed up and worried’

In recent weeks, Spain’s political paralysis has been aggravated by a spate of tumultuous protests in Spain’s restless breakaway region, Catalonia, after the Supreme Court meted out lengthy prison sentences for nine of its pro-independence leaders.

Latest available polls suggest that the Socialists’ share of the vote will remain the largest, albeit set to stagnate at around 27 percent.

If confirmed, their current total of 123 seats would stay roughly the same, meaning that despite remaining parliament’s largest single party, their hopes of forming a majority government would be dashed.

“The Socialists have messed up on their gamble of calling a general election,” said Juan Jose Lopez Burniol, an author, political analyst and former professor.

“It isn’t normal to have so many elections. Anybody working in a company knows that four changes in the top level of management in four years would mean the death of the business.

“People are fed up and worried, more so because the country itself isn’t in such a bad state as its current political situation would suggest.”

Whilst the Socialist vote is not expected to increase, the new hard-right party Vox might enjoy a rise in support.

Boosted by conservative voters’ anger over the ongoing Catalan crisis – which has dominated this campaign’s political narrative – as well as the Socialists recently ordering the exhumation of former dictator General Franco, some expect Vox to double its seats to around 50.

In the process, it could become the third biggest formation in Spain’s parliament.

“Their leader Santiago Abascal’s performance in the main candidates’ TV debate on Monday was a boost to their chances because he came across very well when speaking,” said Pedro Jose Chacon, a political history professor at the Universidad del Pais Vasco.

“Vox is much stronger than people thought.”

But improvement in Vox’s prospects should ease concerns of voter abstention after so many elections, argued Lopez Burniol.

“I think that even if there is some drop in voter numbers, just like in April, Spain’s left-leaning voters will want to limit Vox’s impact, so that voting group’s turn-out in particular will be quite high.”

More seats for Vox would likely come thanks to a significant drop in support for the Ciudadanos party, widely predicted to lose up to three quarters of their 57 seats after an apparently mistimed lurch towards more right-wing policies.

A badly eroded Ciudadanos vote would have a serious knock-on effect on the Socialists’ chances of leading a coalition government, because as Chacon points out: “There could have been a Ciudadanos and Socialists alliance, but all the polls indicate that’s not going to materialise now.”

“So after Sunday, Spain will likely be more ungovernable, rather than less, which is very worrying.” 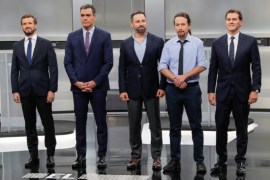 Will the deadlock be broken, and is there a growing far-right threat? All you need to know about Spain’s vote on Sunday. 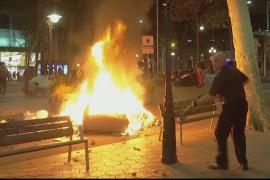 Spain votes in second election this year amid secession calls 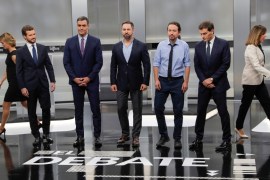 Jailed Catalan leaders and the exhumation of Franco’s remains are the two issues at the top of Spain’s election agenda.