Istanbul, Turkey – Turkey says its forces are ready for military action to establish a “safe zone” in northern Syria, even as critics have raised doubts about the plan.

Ankara has long maintained the goal of the long-threatened push is to drive the Kurdish People’s Protection Units (YPG) – an armed group Turkey considers a “terrorist organisation” – away from the border area and create the conditions needed for the return of Syrian refugees.

Turkish officials say the establishment of this “peace corridor” stretching some 30km (19 miles) into neighbouring Syria’s northeastern region is “essential” for regional peace and the safety and stability of Syrians.

Turkey considers the safe zone a space where about two million of the more than 3.6 million refugees currently hosted on its soil can be returned to.

But the accommodation of the refugees has increasingly become a burden that is too heavy for Turkey to bear as it tries to recover from an economic slump and a currency crisis.

At the same time, rising unemployment, a major defeat in Istanbul’s mayoral election and an apparent need by the ruling party to preserve nationalists’ votes seem to have forced the government to seek alternatives. 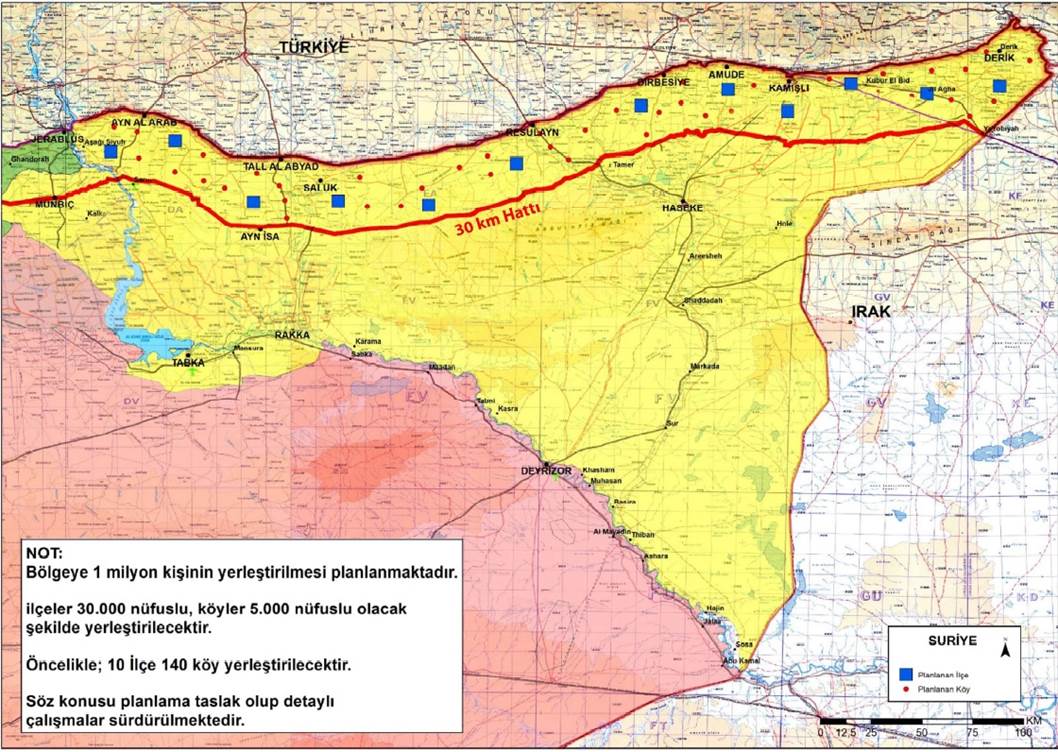 Under a plan presented late last month by the Turkish presidency, 140 villages and 10 districts would be set up in the safe zone with a goal of accommodating at least one million Syrians.

The presidency says the project is expected to cost $26.4bn, seen as far beyond Turkey’s financial means.

“With the help of international society, we’re hoping to set the necessary terms for the return of Syrians,” Fahrettin Altun, the Turkish presidency’s communications director, told Al Jazeera.

He said the project might take a year to complete, depending on international cooperation, and predicted an immediate start of voluntary refugee returns if everything went as planned.

While the government says it is taking the lead in building an international coalition to fund the project, some have cast doubts about the plan’s feasibility.

In an article in the opposition paper Sozcu, economist Ege Cansen called for clarity over the financial policies of the safe zone. He also raised questions about the makeup of the planned local administration, pointing to possible disagreements by current residents in relation to public works and the building of settlements.

On Monday, meanwhile, the United Nations warned against the further displacement of civilians in the event of a Turkish military operation in northeast Syria and expressed concern over the safe zone plan.

Ediz Ekinci, a former Afghanistan adviser to the UN, said humanitarian issues were a priority for the Turkish armed forces.

“If there is the risk of a humanitarian catastrophe, that operational plan is either cancelled or updated by the military. Our forces have always won general approval by our NATO allies.”

While Turkey believes the military operation for a safe zone is essential for stability, voices within the Syrian Democratic Forces (SDF) that controls the northeastern region from east of the Euphrates River to the Iraq border have argued that by sending millions of Syrians back to this area Turkey seeks to change local demographics.

Altun refuted these claims, saying those who fled those areas to Turkey were now afraid to return and accused the YPG of ethnic cleansing in the area.

“You can’t mention it as a ‘demographic change’ when locals want to return after you seized the administration of a place by force and displaced local people,” he said.

Ankara views the YPG armed group as an extension of the outlawed Kurdistan Workers’ Party (PKK), which is deemed a “terrorist organisation” by Ankara, the United States and the European Union.

In a 2014 report, Human Rights Watch documented a range of human rights abuses in areas controlled by the Kurdish Democratic Union Party (PYD), the political wing of the YPG, including arbitrary arrests, disappearances and killings, jurisdictional violations, arrests of political opponents, abuse of prisoners and the use of child soldiers.

In an October 2015 report, Amnesty International also documented civilians living in parts of northern Syria were subjected to serious abuses by the PYD, including forced displacement and home demolitions.

It said the instances of forced displacement and demolition and confiscation of civilian property constitute “war crimes”.

In another report last year, Amnesty said residents in Afrin were enduring a wide range of violations, mostly at the hands of Syrian armed groups that have been equipped and armed by Turkey. The rights group accused Ankara of turning a blind eye to it.