Hong Kong democracy activist Joshua Wong said on Tuesday his bid to run as a candidate in next month’s district elections had been rejected.

Sharing a copy of the letter from the returning officer on social media, the 22-year-old who was jailed for his part in leading the 2014 Umbrella Protests said he was the only candidate who had been barred.

“It proved how Beijing manipulate the election with political censorship and screening,” he wrote on Twitter.

The letter, signed by returning officer Laura Aron, stated that Wong’s nomination had been ruled “invalid”.

November’s district elections are expected to be a major test of the mood in Hong Kong after nearly five months of demonstrations that were triggered by a government plan to introduce amendments to a now-cancelled extradition bill.

The rallies have since developed into a broader call for more democracy, but have also been rocked by outbreaks of violence.

In response to media enquiries, the government issued a statement saying the nomination of a candidate, whom it did not identify, had been ruled invalid.

It indicated the problem was related to the individual advocating “self-determination” for Hong Kong, which it said conflicts with the requirement for candidates to declare they will pledge allegiance to the city and uphold its constitution.

Wong, who is secretary-general of the Demosisto party and one of the territory’s most high-profile campaigners for democracy, has previously been barred from running in elections, as have other candidates seen as supporting independence for the Chinese city.

Demosisto says Hong Kong people should be able to determine their own future.

The former British colony was returned to Chinese rule in 1997 under “one country, two systems”, which allowed Hong Kong freedoms unknown on the mainland.

Joshua Wong disqualified. No need to really read the "reasons" given by the govt for disqualifying a candidate in details, it is just wrong to vet candidates according to their political beliefs. Those "reasons" will always be arbitrary excuses to ban anyone they dislike.

Earlier on Tuesday, chief executive Carrie Lam ruled out any concessions to the protesters – referring to them as rioters – despite acknowledging the serious impact the unrest had had on Hong Kong’s economy.

“For the government to resort to measures that will appease the violent rioters, I don’t think that is the solution,” she told reporters at a weekly press conference.

The city’s tourism and retail industries were both suffering as a result of the continued demonstrations, she admitted.

The territory’s financial secretary Paul Chan said on Sunday that Hong Kong was in recession and the blow to the economy had been ‘comprehensive‘.

Lam also dismissed reports that China planned to replace her in office by March next year as “rumours”. 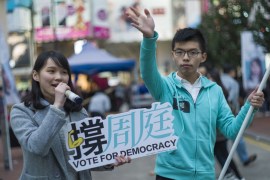 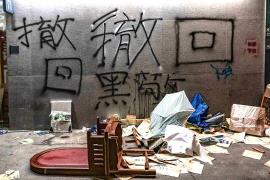 The protesters got plenty of attention but have not achieved their goals, increasing possibility of more violence. 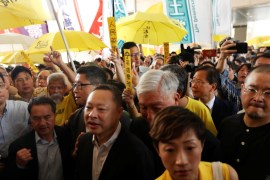 Activists sentenced to up to 16 months’ jail after being convicted last month of public nuisance offences.