The left-wing ruling coalition’s presidential candidate Daniel Martinez was ahead in Uruguay‘s general election on Sunday, according to early results, but faces a tough challenge to beat the centre-right in a runoff next month

The Broad Front’s Martinez had about 38 percent with more than half the votes counted, well short of the absolute majority needed to win outright.

Former senator Luis Lacalle Pou of the National Party was second with 30 percent. He will stand in the November 24 runoff, where he will be able to count on the support of two major rivals.

Third-placed Ernesto Talvi, representing the Colorado party with 13 percent, and fourth-placed candidate Guido Manini Rios of the new right-wing party Open Cabildo, with 10 percent, both said they would support Lacalle Pou in the second round.

“Uruguay needs a change and to realise that change we call on our voters to support Lacalle Pou’s candidacy to lead the coalition that will transform the country,” said Talvi, an economist.

Uruguayans, meanwhile, rejected a constitutional reform that included the establishment of a military police force, and voted to elect all 99 deputies and 30 senators in the Congress.

The vote came on the same day as a general election in Argentina next door, and against a backdrop of regional strife following enormous street protests in Ecuador, Chile and Bolivia, the latter over alleged electoral fraud.

Former Montevideo mayor Martinez, 62, was hoping to win a fourth-straight term for the Broad Front, which has been in power since 2005.

President Tabare Vazquez was barred from standing for re-election.

Martinez said the Broad Front offered “certainty” and “stability” but security was a major issue in the election.

Uruguay has long been considered a bastion of peace and stability in an often turbulent region. But security has been declining, with a sharp rise in some violent crimes reported last year.

In 2018, South America’s second-smallest country registered a record 414 murders, up 45 percent from the year before.

The Broad Front always faced a tough challenge to hold onto power, with voters also angered by a stagnant economy, inflation of 7.5 percent and a nine-percent unemployment rate

The Broad Front is a coalition of leftist movements that in 2005 broke a near monopoly on the presidency shared by the National and Colorado parties since 1830, two years after Uruguayan independence. 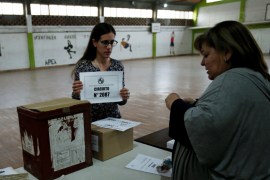 The 14-year of left rule faces challenge in the key elections being held amid a stalled economy and spike in crime. 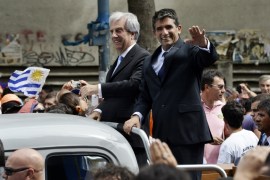 Justice at a crossroads in Uruguay

Tabare Vazquez must tackle the unresolved matter of accountability for dictatorship crimes in Uruguay. 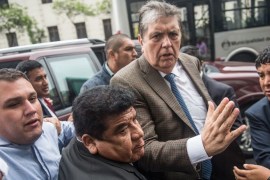 Alan Garcia seeks asylum hours after being barred from leaving the country pending a corruption probe.