The demand for affordable housing citywide – for students and their financially strapped families, as well as for school employees – stands as a dramatic example of organised labour’s effort to expand bargaining beyond bread-and-butter issues.

The pursuit is part of the union’s “social justice” agenda and is a unique departure from standard negotiating tactics. Despite its early rejection by city officials, teachers argue that the issue belongs on the bargaining table.

After months of negotiating, the Chicago Teachers Union’s 25,000 members began striking on Thursday along with thousands of support staff.

Talks continued through the weekend and into Monday did make some progress but did not resolve key disagreements, including the teachers’ demands for stricter class size limits and more support staff in schools, and classes remained cancelled for more than 300,000 students.

Neither side has spoken publicly about any discussion of the affordable housing issue during bargaining sessions. But the union has made clear that the issue is an important one for its membership.

Chicago is certainly not the only US city where the issue of affordable housing for teachers and other school employees is significant.

But Robert Bruno, a professor of labour and employment at the University of Illinois at Urbana-Champaign, said he does not know of any other cities in which the issue has pushed its way into contract negotiations.

He said that is because the chasm continues to grow nationwide between teachers’ salaries and the cost of affordable housing at a time when urban school districts also are having an increasingly difficult time recruiting and retaining teachers.

“Teacher unions around the country are watching this very closely,” Bruno said.

The Chicago union has not released details of its housing proposal – and it is unclear what changes, if any, such language would require of the city. But it does include a demand that the district put in writing that it supports any potential city and state policies aimed at making housing more affordable.

Union officials have noted city programmes that help members of the police and fire department buy a home.

They have also referenced approaches to help teachers used elsewhere, including a California school district that is building affordable housing for teachers and a Colorado programme that covers a portion of teachers’ down payment for a home.

Teachers also want more staff dedicated to helping students who are homeless and working with families who are close to losing their housing.

The union announced some progress on that issue Sunday night, but exact details have not been released.
But there is still clear disagreement about the amount of raises for special education aides and other support staff who joined teachers on the picket lines and say they struggle to afford housing in the city.

Willie Cousins said he makes less than $30,000 working as a teacher’s aide at Bond Elementary on the South Side, while his wife works at Walmart. Cousins, 34, said they and their two children live in a two-bedroom apartment that costs about $800 a month.

Bills for electricity, gas, groceries and other necessities usually mean they have little left over, Cousins said.
“I love what I do, and I want to continue,” he said. “But it comes back to the financial piece. How long will I be able to sustain and live on this salary?”

The gap between the number of affordable rental units and the number of low- and middle-income residents searching for one in Chicago has continued growing since 2012, according to researchers at DePaul University’s Institute for Housing Studies.

Decades of segregation and disinvestment in city neighbourhoods combined to make a web of housing issues that will take a long-term, concerted effort to improve, said Geoff Smith, the institute’s executive director.

“There are these parts of the city that are really strong and thriving, while others are really struggling,” Smith said. “And then you have neighbourhoods in between, dealing with challenges like rising rent.”

Lightfoot, a former federal prosecutor, ran for mayor on a progressive platform, including school reform and investment in poor neighbourhoods, and the union has accused her of failing to follow through on those campaign promises.

Lightfoot said prior to the strike that affordable housing is not an issue that should be covered in contract negotiations, but that she would welcome the union’s input on broader housing policy in the city, along with other groups.

“Affordable housing is a critical issue that affects residents across Chicago, and everyone’s voices need to be heard during this process,” Lightfoot said.

One possible solution would be for the city to lift the requirement that teachers, like police officers, firefighters and other city employees, live in Chicago.

But Bruno said doing that could create new problems – starting with an exodus of teachers who decide, once they move to the suburbs, that they would rather work closer to home. Few other large districts have similar requirements.

In California, where the cost of housing in and around cities such as San Francisco is far higher than Chicago, school districts in well-to-do communities have built housing projects for teachers.

California passed a law three years ago that made it easier for school districts to create affordable housing for teachers, prompting a surge of projects.

“Teachers, because their salaries have not kept up with the price of housing, just cannot afford to live where they work,” said Sarah Chaffin, founder of SupportTeacherHousing.org. “Before, you could buy a house on a teacher’s salary [and] now, you can’t do that.”

Striking teachers also argue that Chicago’s affordable housing crisis affects their students, particularly the more-than-16,000 who were experiencing homelessness last year. The Chicago Coalition for the Homeless includes students who were living in shelters, motels, cars or “doubled-up” in other families’ homes in that count.

Barbara Duffield, executive director of a national nonprofit called SchoolHouse Connection that focuses on students who are homeless, said teachers and other staff are often in the best position to sense a change in a student’s life outside school.

“They are the first to notice, for example, a child falling asleep in class or hoarding food,” she said. “They have a kind of oversight, every single day, that nobody else does.” 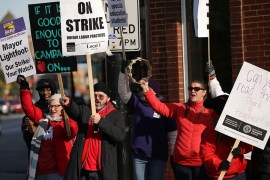 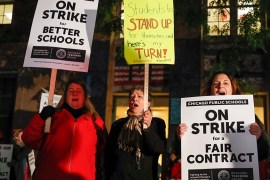 Teachers in the US’s third-largest school district stop work over wages, lack of resources and other issues. 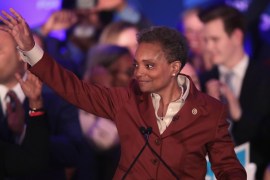