The Philippine president praised Israel’s prime minister for his “critical help” in ending a five-month siege by rebels in a southern city as they held talks in Jerusalem amid criticism of the Filipino leader’s human rights record.

Rodrigo Duterte told Benjamin Netanyahu on Monday the conflict in Marawi on Mindanao island “could have dragged on were it not for the very substantial and crucial equipment” from Israel. He did not elaborate.

It was the first time Duterte acknowledged publicly Israel’s help in ending the Marawi siege in 2017.

“Mr Prime Minister, I can only thank you so much especially at the critical help that you have extended my country in time when we needed it most,” Duterte said.

“In the recent trouble in the Philippines, the extent of the help that you extended was very critical in winning the war.”

The Marawi siege took place between May and October 2017, when fighters who pledged allegiance to the Islamic State of Iraq and the Levant (ISIL, known as ISIS) took over the city.

The battle killed more than 1,000 rebel fighters, soldiers and civilians – and displaced hundreds of thousands of people.

The visit was the first by a Philippine president to Israel since the countries established diplomatic relations in 1957. Duterte compared the two in peace and conflict.

Duterte is eager to improve security cooperation with Israel, which has sold the Philippines three radar systems and 100 armoured vehicles. Manila is now eyeing an aircraft deal.

Duterte visited the Yad Vashem Holocaust memorial in Jerusalem on Monday, and later a monument commemorating the Philippines’ rescue of Jews during the Holocaust.

In 1939, then President Manuel L Quezon issued 10,000 visas for European Jews, but only about 1,300 actually made it to the Southeast Asian nation.

Netanyahu noted how the Philippines took in the refugees who fled the Nazis, as well as its lone vote from Asia for the establishment of an Israeli state.

Recently, the Philippines also abstained in a UN vote rebuking US President Donald Trump’s decision to recognise Jerusalem as the capital of Israel.

“We remember our friends and that friendship has blossomed over the years and especially over the last few years,” Netanyahu told Duterte.

Netanyahu has worked to cultivate allies in Asia, Africa and Latin America, where many countries have historically shunned Israel over its treatment of the Palestinians.

But Netanyahu has come under fire for embracing Duterte, whose forces are accused of killing thousands in anti-drug raids since he took office in June 2016.

Duterte also caused outrage that year when he compared his campaign to the Holocaust and himself to Hitler, saying he would be “happy to slaughter” three million drug addicts. He later apologised.

Netanyahu “is willing to whitewash an illegitimate leader who took pride in massacring his citizens and violating human rights, and why?” Tamar Zandberg, head of the leftist Meretz party, wrote on Facebook.

“Because Duterte is willing to support the occupation [of Palestine],” she said. 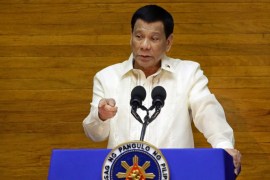 Defence, labour and tourism deals high the agenda during Israel visit, the first by a Filipino president. 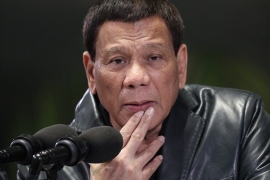 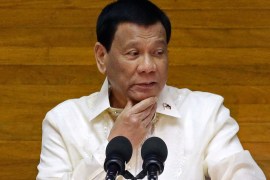