The United Nations has warned that a military attack or siege by pro-Yemeni government forces supported by a Saudi-led coalition on the port city of Hudaida will impact hundreds of thousands of innocent civilians.

Lise Grande, the UN Humanitarian Coordinator for Yemen, said on Friday that humanitarian agencies “fear, in a prolonged worst case, that as many as 250,000 people may lose everything – even their lives”.

As many as 600,000 civilians are currently living in and around the rebel-held city, a vital lifeline through which most of Yemen’s population gets food and medicine, according to estimates by the UN and its partners.

The UN warned that the likely “catastrophic humanitarian impact” would be worsened due to Hudaida’s key role as the point of entry for some 70 percent of Yemen’s imports.

“Cutting off imports through Hudaida for any length of time will put Yemen’s population at extreme, unjustifiable risk,” Grande said.

Saudi Arabia, together with several other Arab nations, launched a military campaign in 2015 in support of Yemen’s internationally recognised government, aiming to roll back advances made by Houthi rebels after they overran much of the country in 2014.

Most countries have since withdrawn their forces from the US-backed coalition, with only Saudi Arabia and the United Arab Emirates conducting attacks in Yemen.

“Fierce fighting erupted Thursday after a group of rebels attempted to infiltrate army positions in southern Serwah,” the statement quoted an unnamed military source as saying.

The military artillery had targeted Houthi sites and concentrations throughout southern Serwah, leading to heavy casualties and material losses among the ranks of the rebel group, it added.

There was no immediate comment from the Houthis regarding the army’s claims.

The Houthis have controlled the centre of the Serwah Directorate since April 2015, and the area remains the scene of frequent clashes between the two sides.

Impoverished Yemen has been wracked by violence since 2014 when the Houthis overran much of the country, including the capital, Sanaa.

The conflict escalated in 2015 when Saudi Arabia and its allies, who accuse the Houthis of serving as Iranian proxies, launched a massive air campaign aimed at rolling back Houthi gains.

Since then, more than 10,000 people have been killed, most of them civilians.

The ongoing violence has also devastated Yemen’s infrastructure, including water and sanitation systems, prompting the UN to describe the situation as one of “the worst humanitarian disasters in modern times”.

On Thursday, the International Committee of the Red Cross pulled 71 of its international staff out of Yemen, citing rising security threats. 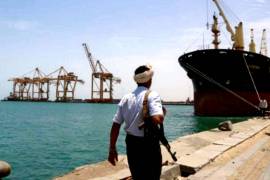 Is Yemen set to lose a humanitarian lifeline?

Saudi-led coalition fighting Houthi rebels is preparing a major offensive on the port city of Hudaida. 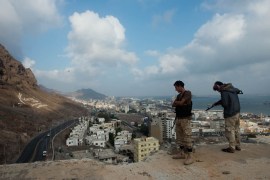 Struggle and survival in war-torn Yemen

Civilians are struggling to cope with the devastating consequences of the three-year conflict. 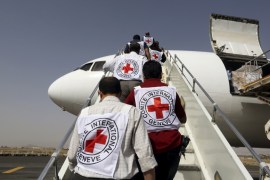 Aid agency calls on all warring sides to provide security guarantees so it can continue its life-saving work.