At the end of a tumultuous week, marked by a currency crunch and rare protests by vendors in Tehran, economists are urging Iran’s President Hassan Rouhani to take decisive steps to deal with the country’s pressing economic challenges.

On Tuesday, Iran’s exchange rate hit 79,000 rials to a US dollar on the black market – up at least 110 percent from the same period last year.

A convergence of factors, including the uncertainty over the survival of the nuclear deal in the wake of Washington’s withdrawal and the return of US sanctions, as well as fading consumer sentiment and soaring prices of imported goods have contributed to the turmoil, experts said.

The anxiety has already burst open with shopkeepers in Tehran’s central market staging a series of protests this week, prompting President Hassan Rouhani on Thursday to call on the nation to “remain calm” and united in the face of pressure on its economy.

The country’s Supreme Leader Ayatollah Ali Khamenei also weighed in, describing the economy as “the most critical issue” faced by the country while urging the government “to confront those who disrupt the economic security”.

But rhetoric and threats of prosecution aside, there are several policy decisions the Rouhani administration can carry out to ease the pressure on the currency, experts said.

Saeed Laylaz, a prominent Iranian economist, said the government should stop the decades-old government practice of subsidising the purchase of US dollars by Iranians travelling overseas.

According to government policy, every Iranian who travels abroad is entitled to purchase a maximum of $1,000 at half the market price.

Between 10 to 12 million Iranians travel abroad every year and they spend around $15bn to $20bn, Laylaz told Al Jazeera.

Because of the subsidy, he said, the demand both for travelling abroad and for dollars continues to rise at a “very fast” pace.

“I am not advocating that the government impose limitations on foreign trips,” said Laylaz. “But the government should not pay any subsidies to passengers travelling outside of the country.”

“I don’t know why the government did not make any decisions about this very, very important issue yet,” added Laylaz, who served as an adviser during the tenure (1997-2005) of reformist President Mohammad Khatami.

“Where is the management of the government?”

Laylaz said the government can also lower the demand of the US dollar by limiting imported goods.

The country’s customs agency already announced Wednesday that it will ban 1,339 “non-essential” imported items that could otherwise be produced in the country. The ban included home appliances and food items, according to the Tehran-based Financial Tribune.

Rouhani must also do “some management [reshuffling]” to address the currency crunch, said Ghanbar Naderi, a political analyst and journalist at Kayhan International.

“They have done a terrible job,” said Naderi. “Their policies have been rubbish and they are also to blame for what is going on in the market.”

There has also been speculation that Rouhani might replace Valliolah Seif, governor of the central bank of Iran.

Earlier this year, the Rouhani government already made some attempts to halt the rial’s slide, imposing a so-called unified 42,000 rial to a dollar rate. It also made some arrests in a bid to crack down on black market traders, while also raising interest rates.

Those actions proved to be insufficient as black market currency traders have continued to offer higher exchange rates for dollars.

Naderi urged the government to target those currency profiteers, who pay less money to buy dollars from the government before selling it at higher prices in the black market.

Meanwhile, he criticised the bazaar owners who were involved in the recent protests.

Naderi said they too have become a drag in the economy, adding that their influence on the political discourse has been diluted since they helped overthrow the Shah during the 1979 Islamic Revolution.

He said the bazaar traders have become “obsolete” because they have refused to modernise.

“We have so many modern shopping centres, malls, trading centres and financial centres now that have the final say in the economic matters of this country,” he said.

For Sara Vakhshouri, head of an energy consulting firm, mismanagement and the impending return of US sanctions play a significant role in the country’s currency woes.

“The domestic market knows that very soon Iran’s access to foreign currency would be reduced significantly,” she told Al Jazeera.

‘Back to the negotiating table?’

Rather than Iran’s economic fundamentals, the drop in the currency may be attributed more on the “political and psychological” condition of the Iranian public, said Laylaz, the Tehran-based economist.

Currently, Iran’s exports remain robust, posting a 21 percent increase in the first three months of the current Persian year compared with the same period last year, according to Iran’s Mehr news agency. That is worth $11bn in real terms.

But that could change soon, as several US sanctions are expected to snap back between August and November.

Since President Donald Trump announced in May Washington’s unilateral withdrawal from the 2015 nuclear deal, the US has also warned that other countries could also be sanctioned if they continue to trade with Iran.

Vakhshouri, the president of US-based SVB Energy International, said she could not discount the Iranian government’s return to the negotiating table “to maintain its existence”.

“Iran’s leader has rejected any direct negotiations with President Trump. But things could always change if they found that the whole world is against them and even their traditional allies, Russia and, perhaps, China, have joined the alliance against Iran.” 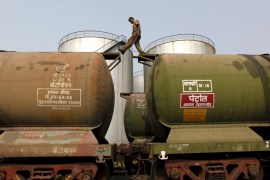 India preparing for ‘cut in oil imports from Iran’

India prepares for a ‘drastic reduction’ of Iranian oil imports in a push by the US to cut trade ties, Reuters reports. 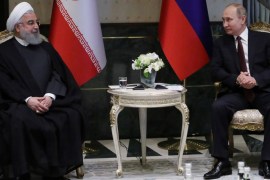 Will Russia let Iran down to win the US over?

Russia sees itself as a superpower, not as Iran’s equal. This is what dictates its policies towards Iran. 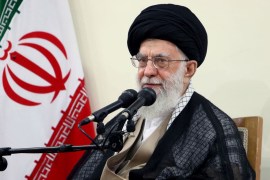 Iran: Khamenei urges judiciary to confront those who harm economy

Members of Iran’s judiciary say ‘economic saboteurs’ could face capital punishment, up to 20 years in jail.