Turkish President Recep Tayyip Erdogan said on Friday that his country would postpone a military operation against Syrian Kurdish fighters in northeast Syria as he “cautiously” welcomed Washington’s decision to withdraw its troops in the area.

Speaking during a speech in Istanbul, Erdogan said the US decision meant Turkey would “wait a little longer” before launching the operation.

“Of course, this is not an open-ended waiting period,” he warned, adding that Turkey was working on plans to “neutralise Daesh elements” that still exist in Syria. Daesh is the Arabic acronym for the Islamic State of Iraq and the Levant (ISIL, also known as ISIS).

Erdogan had announced on December 12 that Turkey would start an offensive in northern Syria in “the next few days”, but on December 14, he spoke to US President Donald Trump in a phone call.

According to Turkish daily Hurriyet on Friday, Trump decided to pull out of Syria during that call with Erdogan and ordered his national security adviser John Bolton to “start the work” to prepare withdrawing troops.

Erdogan also promised on Friday to clear Syria of US-backed Kurdish armed groups after the US decision to pull troops out.

“In the next months, we will see an operational style aimed at removing the YPG (Kurdish People’s Protection Units militia) and Daesh (ISIL) elements on the ground in Syria,” Erdogan said.

The Turkish government views the US-backed YPG as an extension of an armed group fighting inside Turkey.

Although Erdogan welcomed Trump’s decision to leave Syria, he said he remained “cautious” because of “past negative experiences”, referring to Ankara’s continued disappointment over the US administration’s failure to stop providing military support to the YPG in their fight against ISIL.

In November last year, Turkish officials said Trump had promised not to supply weapons to the YPG, although the White House was not as explicit about its intentions.

American support of the YPG, which spearheaded Washington’s battles in Syria to eliminate armed groups, has long been a source of tension between the NATO allies.

Meanwhile, on Friday, the Kurdish-led Syrian Democratic Forces (SDF), which is made up of an alliance of Arab and Kurdish groups, said they may not be able to hold ISIL prisoners if the situation in the region gets out of control.

Ilham Ahmed of the Kurdish-led Syrian Democratic Forces (SDF) warned that the Trump administration’s decision to withdraw all of its forces would have dangerous repercussions and a destabilising effect on the entire region. 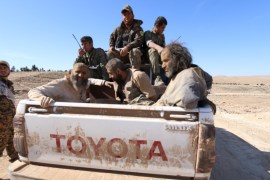 Kurdish-led forces ‘may not be able to contain ISIL prisoners’

SDF discusses plan to release 3,200 local and foreign ISIL fighters after US decided to pull out its troops from Syria. 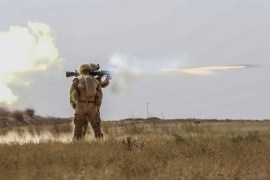 Syria battle against ISIL far from over, despite US pull-out plan

Despite assurances from Trump that ISIL is defeated, US raids against group in eastern Syria have intensified recently. 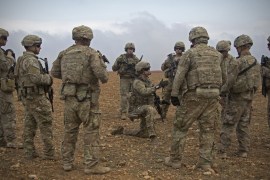