Four policemen were killed and 42 other people were wounded in a suicide car bomb attack on a police headquarters in Iran’s southeast on Thursday.

State media also reported shooting in the area, home to a Sunni Muslim minority in the largely Shia country, which has long been plagued by violence from both drug smugglers and separatists.

Rahmdel Bameri, governor of Sistan-Baluchestan province, said a bomb-filled vehicle was used to target the police station by the suicide attacker.

“Police stopped the explosive-laden car and started firing at the driver … who then set off the explosion near the police headquarters in Chabahar,” said Bameri.

Images posted online showed thick smoke rising from the sky in the area where the attack took place.

“Foreign-backed terrorists kill and wound innocents in Chabahar. As we’ve made clear in the past, such crimes won’t go unpunished,” Zarif said on Twitter.

Tehran has accused its regional rival Saudi Arabia and the United States of funding armed groups, a charge Riyadh and Washington deny.

Foreign-backed terrorists kill & wound innocents in Chabahar. As we've made clear in the past, such crimes won’t go unpunished: In 2010, our security services intercepted & captured extremists en route from UAE. Mark my words: Iran WILL bring terrorists & their masters to justice pic.twitter.com/Tij1I7zemx

Suicide bombings are rare in Iran, but armed groups have carried out several attacks on Iranian security forces in the Sistan-Baluchestan province in recent years.

Iran has stepped up security in border areas after gunmen in September opened fire on a military parade in Iran’s southwestern city of Ahvaz, killing 25 people, almost half members of Iran’s elite Islamic Revolutionary Guards Corps.

The southeastern port city in Iran’s Sistan-Baluchestan province is located near the border with Pakistan. The city hosts the operation of a joint port project between Iran and India by the Gulf of Oman.

Chabahar Port, which is being developed with funding from India, has been described as India’s “golden gateway” that will help boost trade links to land-locked Afghanistan and Central Asia, while bypassing its regional rival, Pakistan.

“The perpetrators behind this dastardly attack should be brought to justice expeditiously. There can be no justification for any act of terror,” the ministry said.

In December 2010, at least 41 people were killed and 90 others were wounded following a suicide attack near a mosque in Chabahar.

Another coordinated assault by fighters from the Islamic State of Iraq and the Levant (ISIL) group on June 7, 2017, targeted the parliament in Tehran and the shrine of Ayatollah Ruhollah Khomeini, the leader of Iran’s 1979 Islamic Revolution, killing at least 18 people and wounding more than 50. 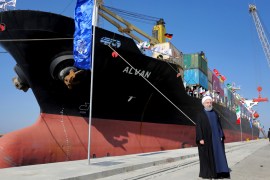 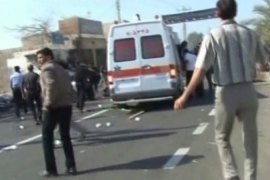 At least 41 people killed and dozens injured after a suicide bombing near a mosque in the Iranian city of Chabahar.