Heavy rain has lashed parts of Central America and has led to flash flooding and landslides.

Two tropical disturbances, one in the eastern Pacific and one in the Caribbean, are close enough to each other and are enhancing the tropical showers over Costa Rica, Nicaragua, Honduras and Guatemala.

Total rainfall over the region has averaged between 50 and 100mm daily over the last several days.

Both areas of low pressure are expected to take very different paths over the next several days.

The tropical disturbance just off the coast of Honduras is forecast to begin moving north and strengthen. Over the next few days, it is expected to cross over the northeastern tip of the Yucatan Peninsula and then into the warm waters of the Gulf of Mexico.

More strengthening is expected as it tracks across the Gulf before making an expected landfall along the southern US coast between Florida and Louisiana on Wednesday.

The tropical disturbance just off the Pacific coast of El Salvador will continue on a much slower path, gradually crawling up the coast towards Guatemala, but not expected to strengthen.

This cluster of storms is expected to bring heavy rain across the region through Monday. 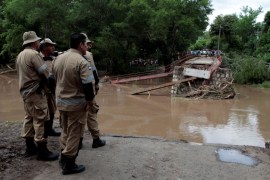 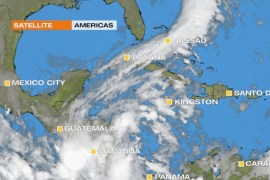 The busy Atlantic basin hurricane season continues with a formation alert for much of Central America. 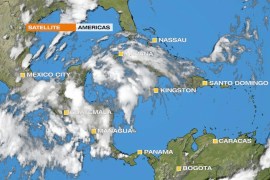