A Bangladeshi court has doubled the jail term of opposition leader Khaleda Zia from five to 10 years in a corruption case following an appeal by the country’s Anti-Corruption Commission (ACC).

The two-time former prime minister was sentenced to five years rigorous imprisonment in February in the Zia Orphanage Trust corruption case. She has been in jail since then.

Bangladesh‘s imprisoned opposition leader was handed another seven years in prison on Monday for corruption, charges her supporters say are politically motivated to prevent her from running in general elections due by the end of the year.

Zia, chairperson of the country’s main opposition Bangladesh Nationalist Party (BNP), and five others were accused of embezzlement of funds meant for charity.

The six, including her son and heir-apparent Tarique Rahman, were convicted in February for embezzling over $252,000 from foreign donations intended for a charity named after former President Ziaur Rahman, Zia’s husband.

“Now, there’s no chance for the BNP chief to contest the next election,” Khurshid Alam Khan, a lawyer for the government, told reporters.

Khaleda and Prime Minister Sheikh Hasina, both related to former national leaders, have dominated politics in Bangladesh for more than two decades, nursing a long and bitter rivalry.

Zia’s party, the BNP, has vowed nationwide marches later on Tuesday to protest against the verdict.

The latest court ruling deals a crushing blow to the BNP and its embattled leader, who despite being jailed, had clung to a faint hope of running against Hasina in December.

“She cannot contest the elections unless the conviction is set aside by a higher court,” Bangladesh’s attorney general Mahbubey Alam told the AFP news agency.

In February, when Zia, 73, was first sent to jail, violent clashes had occurred in major cities across the Muslim-majority democracy of 160 million, with opposition demonstrators clashing with police and activists from the ruling party.

Earlier this month, her son Tarique Rahman was jailed for life in absentia over a 2004 grenade attack on a political rally led by Hasina, in which 20 people were killed. Rahman lives in exile in London.

In recent months, Zia’s health has deteriorated inside the abandoned 19th-century jail – where she is the only inmate – with a physician saying that arthritis has rendered her left hand useless.

Her lawyers have accused the government of putting her health at risk by refusing her specialised care in prison.

Zia entered politics in the mid-1980s after her husband, a former military dictator, was assassinated in an abortive coup. 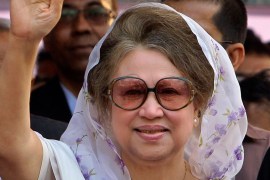 Khaleda Zia found guilty of misuse of power as PM in collecting $375,000 for a charitable trust from unknown sources. 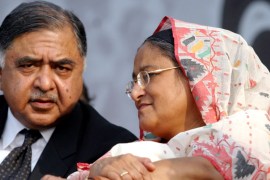 BNP forms alliance with centrist parties ahead of elections in bid to boost support after jailing of its leaders. 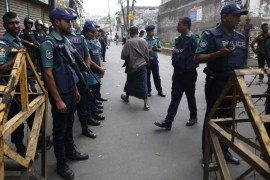