Heavy overnight rain swept through streets and forced hundreds of people from their homes in the southern Spanish province of Malaga on Sunday killing one firefighter, the fire service said.

In the town of Campillos, cars were swept up by the high waters and left as piles of wreckage when the floods subsided.

According to the regional government’s environmental department, almost 400 millimetres of rain fell in 24 hours in the town of Ardales, which is around 62 km from the main city of Malaga

A firefighter died while emergency services were responding to flooding caused by heavy rain in southern Spain, authorities said.

Emergency services for the southern region of Andalusia said the firefighter went missing when his truck overturned on a flooded road during heavy rain overnight on Saturday. His body was found after a search on Sunday morning.

Spain’s weather service issued a red alert – its highest warning – for the area. The skies are now clearing. Fine, dry and sunny weather is now moving in as the daunting task of clearing up gets under way. 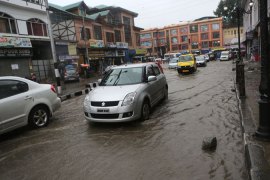 Torrential monsoon rain has caused misery in northern parts of India and Pakistan. 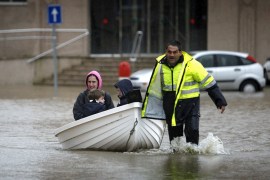