Rwanda’s incumbent leader Paul Kagame has sealed a landslide victory in presidential elections, granting him a third term in office and extending his 17 years in power.

“We expect that even if we get 100 percent of votes, there will not be any change,” he said.

Kagame has won international praise for presiding over a peaceful and rapid economic recovery in the east African nation since the 1994 genocide, when an estimated 800,000 people were killed.

But he has also faced mounting criticism for what rights groups say are widespread human rights abuses, a muzzling of independent media and suppression of political opposition.

The electoral board expected turnout to top 90 percent in elections that fielded two challengers.

Kagame, who cast his vote in Kigali’s Rugunga polling station earlier on Friday, said he would work to sustain economic growth.

“This is another seven years to take care of issues that affect Rwandans and ensure that we become real Rwandans who are [economically] developing,” he said in a speech broadcast live on television.

“But opposition says people don’t have much choice and [the high turnout] reflects a climate of fear and oppression,” he said.

Under Kagame’s rule, some dissidents were killed after they fled abroad, in cases that remain unsolved. The government denies any involvement.

Habineza had told Al Jazeera before the election that he expected a clean sweep at the polls.

“Tonight, I predict a result of 70 percent in my favour … according to my calculations, that is what I will get if it is a free and fair election,” said Habineza.

“If I don’t get it, I will accept the results, provided it is free and fair. We have already struggled with campaigning and some of our supporters have been scared off, but I hope they will vote today.

“If they are scared today, then this is unfairness and I cannot accept [the result] … it will be a catastrophe.”

Habineza, who won 0.45 percent of the early count, had promised to set up a tribunal to retry dissidents whose convictions by Rwandan courts have been criticised as politically motivated.

Diane Rwigara, a disqualified candidate, told Al Jazeera that she believes her application to run was wrongly rejected by the electoral commission.

“Rwandan people are fearful of the president. There is a fear of the ruling party. Out of fear, they act like they support the president,” she said.

Kagame’s Rwandan Patriotic Front (RPF) has governed the country since its armed wing defeated the country’s ruling civilian and military authorities in 1994, ending the genocide of 800,000 Tutsis – Kagame’s ethnic group – and moderate Hutus.

He has overseen strong economic growth, at an average of eight percent between 2001 and 2015, while also turning Rwanda into a technological hub and rooting out corruption.

A 2015 referendum saw 98 percent of the electorate in favour of changing the constitution to allow Kagame to seek a third term. He could stay in power until 2034.

Sarah Jackson, deputy director for Amnesty International’s East Africa office, had called on the international community to remain watchful before and during the election. 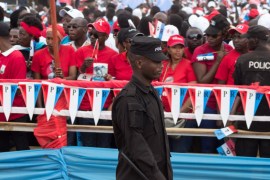 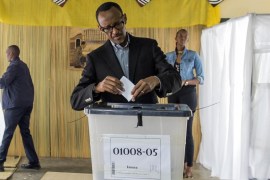